So here’s a story for you. And it’s a true one.

Some weeks ago, the most marvelous, tallented Lauren Shantall, from the Freeworld Design Centre in Cape Town, invited me to join in a project they are working on, in aid of the Safe Spaces Campaign, which is an extra-ordinarily good cause.

The basic idea is that they asked 45 local creatives to take a simple Hope Soccer Ball that looks something like this: 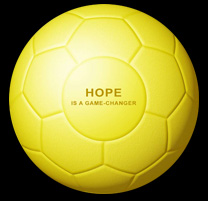 And they asked us to have some fun designing on or around it. Then on the 4th August they’ll auction the balls off at an awesome jam-packed event at their HQ at the Freeworld Design Centre (71 Waterkant St).
(If you’ve never been and you like designery stuff you should go check it out, it’s awesome.)

AAAAnyway, so that’s the backstory.

So for my ball idea I took a koki pen and wrote some words on the ball. And I thought it was okay, I mean it looked a little Standard Five Projecty, and it had a little smudge here and there, and the words weren’t all lined up or anything, but the words were alright, and I thought all was good in the hood.

Until… I logged onto facebook and saw some of the balls that had started to come in from around town. Here are a few: 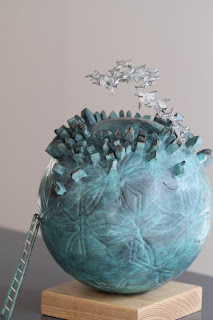 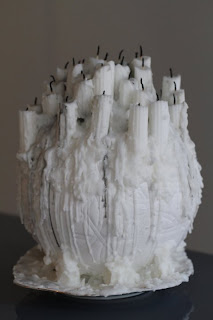 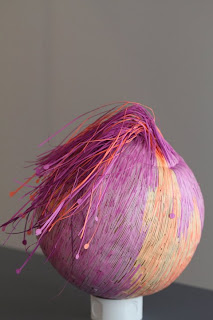 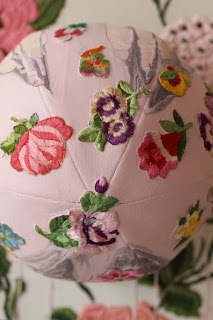 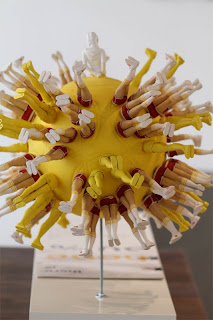 So that’s when I TOTALLY FREAKED OUT!

I mean, the one ball is BRONZED, for fuck’s sake! They’re phenomenal! They’re art! I’m a writer, I can’t compete with that! All I can draw is a stick figure man, and then he usually turns out looking like a horse anyway!

My ball was a disaster, there was no way I could hand it in. It was the worst possible situation. I was dead meat. A gonner. Completely screwed!

So I did what any girl in my situation would do. I pulled out my nail polish remover and some cotton wool and I scrubbed those dumb kokied words off my ball, and I thought and I thought, and I thought some more, and then I started again from scratch. And I got busy knitting.

So here’s my ball, it’s finally finished. It’s a truly recycled ball, in every sense of the word. (If you look closely you can still see some of the words from before. I’m just hoping nobody looks too closely.)

What do you think? I call it Winter Ball: 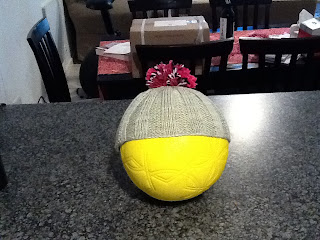 I’ll drop it off on Monday, and they’ll auction it off on Thursday. Eep! I know it’s all for a good cause, and just a bit of fun, but I really really hope Winter Ball doesn’t get auctioned straight after Bronzed Ball!