My art director, Karin, pulled out a bag of wine gums at work yesterday. 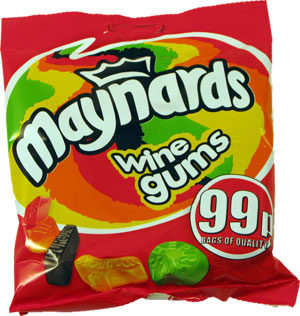 Been a while since I’ve seen or eaten one of those.


But they got me thinking, how weird is it to call a kiddie’s sweet ‘Wine Gums’! Who’s genius brainwave was that?


That’s like calling carrots ‘cigarette sticksTM‘.
Or calling Nik Naks ‘Crack BulletsTM‘ and then saying: ‘Gowan, give ’em to your kids!’


But what’s even more weird is that it’s taken me 38 years to realise how bizarre and inappropriate the name Wine Gums is.


Until now, it’s never once struck me as even vaguely odd that each little sweet has the name of a hard liquor embossed on it. 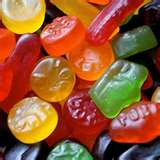 The history of this little boozy sweet goes something like this (thank you pfangirl):


Charles Riley Maynard started his business in 1880 making sweeties in his kitchen with his brother Tom.
The Maynards business grew and grew.
Eventually Wine Gums were introduced to the range in 1909 by Maynard’s son, Charles (jnr).
His dad, Charles (snr) (sober as a judge and all church-going and stuff) almost fired him on the spot.

There are a couple of stories to explain the name, the one that sounds the most likely to me is this one:

After hearing a fiery sermon, young Maynard decided to market his sweets as an aid to cutting down on alcohol consumption. So he called them “wine gums”, and labelled them with boozy names. 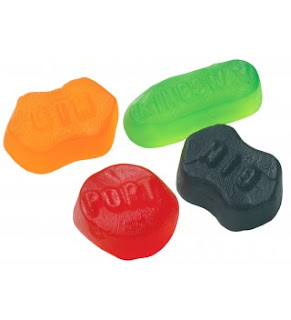 Awesome! Gin, port, tequila and beer, what’s not to like about these sweeties, kids?

According to Cadbury’s (via Wikipedia) the red and black ones are the most popular.
Now you know.

Also they don’t contain any wine. Not even a drop. Sorry.


They don’t contain any gums either. I checked.