Who’s having the most sex?

Are you having tons of wild and crazy sex? Yes, no, maybe, while doing handstands, or all of the above? No, don’t tell me, I’ll tell you.

The Sunday Times sex survey has had a good rummage around in the drawers of South Africans of all races, colours and genders, to see what we’ve been getting up to in the boom-chicka-wa-wa department.

Did you know that in South Africa, 41 to 50 year olds have more sex than any other age group? Closely followed by 50 to 65 year olds.

It’s unexpected news, I was having way more sex in my 20s and 30s than I am now. I want to know who in our age range is bringing up the statistics. Is it all those Africa Burners? I checked out this demographic in the queue at Woolies yesterday, and again at the post office and Dischem, it really doesn’t look like any of them are getting it at all, let alone more than Millennials.

Or maybe Millennials spend so much time growing their own granola, longboarding to work and searching out the perfect jaunty hat and artisanal bread, that they don’t have as much time for sex as we did at their age, and so we’ve managed to overtake them on the inside corner?

But the truth according to these new stats, is that singles are sexually unhappy right now, with a score that comes in way below the national average. Which is surprising in this age of Tinder, the internet, high performance condoms and the acceptability of random hookups. We haven’t been this poised for fun, chandelier-swinging sex with strangers since Mick Jagger first put on leather pants, and yet here we are.

I guess I shouldn’t be surprised that there are all these peculiarities in sex. Sex itself is one massive hard on wrapped in a bunch of anomalies. The only question I did think was missing from the survey though was, ‘How honest are you when you answer sex surveys?’ 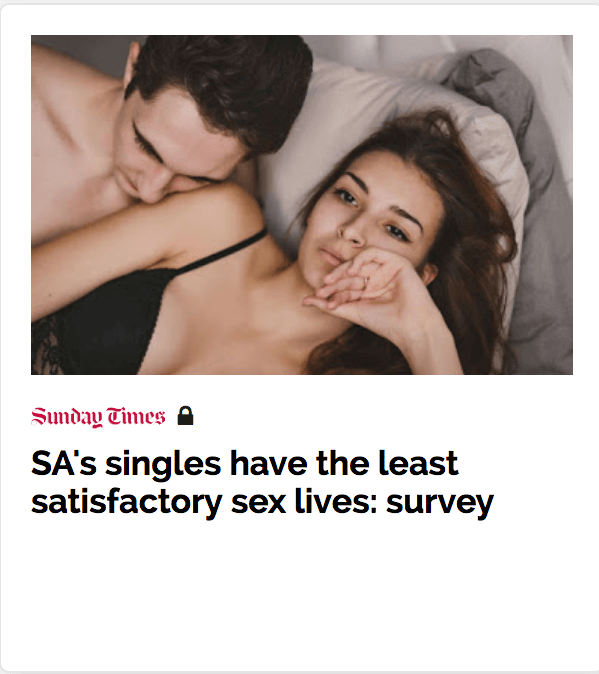 One response to “Who’s having the most sex?”