where not to invest your millions:

i found this small article in the latest issue of finweek.
(september 10th issue)

DISCLAIMER: let me just preface this blog post by saying that i have absolutely zero knowledge of finance or the economy. i have never invested on any stock exchange of any description. and if my life depended on it i wouldn’t be able to tell you what 6 times 9 is. so you’d better take this post from whence it comes.

i’ve underlined some of my areas of concern in red on the article below. 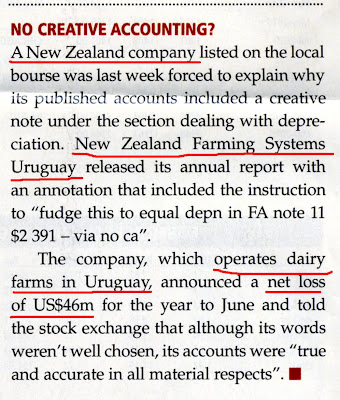 ok, let’s see, say i wasn’t a writer, but was a stripper or a lawyer and so i had some cash to splash and i wanted to invest on the stock exchange. i just don’t think i would ever invest in a company called ‘New Zealand Farming Systems Uruguay’.

that would be a bit like betting in a horse race on a horse called ‘donkey’.

who named you, poor company? and why did they stop brainstorming after their first idea?

if however i had invested in this company, i don’t think i would be surprised to later discover that they had announced losses of 46 million us dollars. i mean really, they’re a company of new zealanders who milk cows in uruguay. what did they think would happen?

you couldn’t make this shit up!