A couple of weeks ago I was lucky enough to find myself at The Cheltenham Literature Festival. The town itself is about two and a half hours outside of London, by train.

I spent nine days there, and got to see so many of my very favourite authors talking about how they do what they do. It was astonishing. I also stalked my favourite author, Jim Crace, a little, but I’m sure it’s nothing he hasn’t experienced before.

Not being much of a photographer, and not even owning a camera, I spent my entire time, head down in the sessions, taking copious notes. It was what I would imagine conscience students are like.

So I thought I’d try decipher some of my handwriting (perhaps I could have been a doctor) and type up some of the author’s comments as verbatim as possible and share them with a group of people I thought might appreciate them. Ie: you lot.

Salman Rushdie comes out onto stage with the interviewer, someone from the BBC. The theatre is packed, there are maybe two hundred people. When the interviewer reminds everyone to please turn off their cell phones for the session, Rushdie gets a surprised look on his face and then digs in his inside jacket pocket, pulls out his cell phone and turns it off, with a naughty smile. That gets a big laugh. I think we’re all so daunted at the sight of this legendary man standing in front of us, that we’re just relieved he’s human and that we’re allowed to laugh. 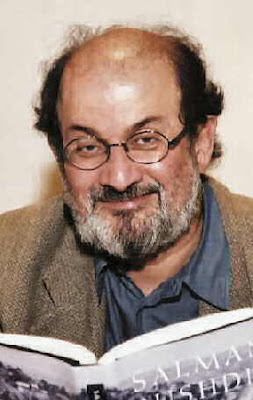 He starts out reading from his new book, Luca and the Fire of Life. From what I can gather it’s part fairy tale, part fable. I soon realise I could listen to him read that entire book. He’s flawless. I’m sucked into a chapter about riddles. The characters in the story have many many lives, like in a computer game. And they are constantly hunting for more lives, and losing lives in the process. It’s clearly allegoric on so many levels, but so simply put.

The interviewer asks him about the genre of the book and he says it’s a ‘quest narrative’.
Two of the characters are ‘Bear the dog’, and ‘Dog the bear’. I find that so charming, it makes me laugh out loud (and probably a bit too loudly) every time he says it.

He says this book operates in the space between adult and children’s books.

Here are a few other things he says that I write down as best I can, because I like them:

‘…why do people compulsively ask what it is? It’s like the Wizard of Oz, you don’t ask if it’s for children or for adults.’

‘Computer games exist so children have a way of feeling superior to their parents.’
The interviewer asks him how he feels about having his life threatened by writing something offensive. He says:

‘Well, it’s my view that Dan Brown should live. He can’t be killed for writing something that offends.’

Then they invite the audience to ask questions. Some chop in the back stands up and asks:

‘When you write, how do you do that?’

The audience erupts. Throughout the festival I discover that there’s at least one ‘stupid chop’ question in every session I go to.

But he answers with grace after only a mild and contained grimace:

‘It’s about sitting there till you’ve done something. It sounds a little lavatorial.’ he says. ‘I think sitting down is very important. Does that help?’
The audience erupts once more.

‘Writers have a little bundle of pain that drives them.’
On how people of different ages and levels of experience write, he says:

‘The old have control and fake fire. But the young, have fire and fake control.’
On a question about writing magic realism he says:

‘Writing doesn’t have to be a photograph. It can still be a portrait of the world, but a non-literal portrait. It all just depends what the story demands.’

People are fascinated by the Fatwa placed on his head after he wrote The Satanic Verses and most of the questions are about that.

He says that before the uproar over that book he was a big success in the Middle East. He says they even filched his third book, ‘Shame’. He says they stole it and published a pirated version of it in Farsi. Which they totally would have gotten away with, except they went and gave it a big Farsi book award and contacted his publisher to invite him to accept it.

He said he recently met a man who had been an active and violent protester back when they were having mass burnings of The Satanic Verses. The man said to him after they had chatted briefly, that he had only recently read the novel, and he couldn’t see what all the fuss had been about.
Rushdie responded: ‘Asshole, you were the one making the fuss!’
‘Yes well, you know,’ the ex-protester said, ‘books aren’t really my thing.’

He was incredible to listen to and transcribe as fast as my pen would allow me. What a legend.

4 responses to “What Salman Rushdie said”