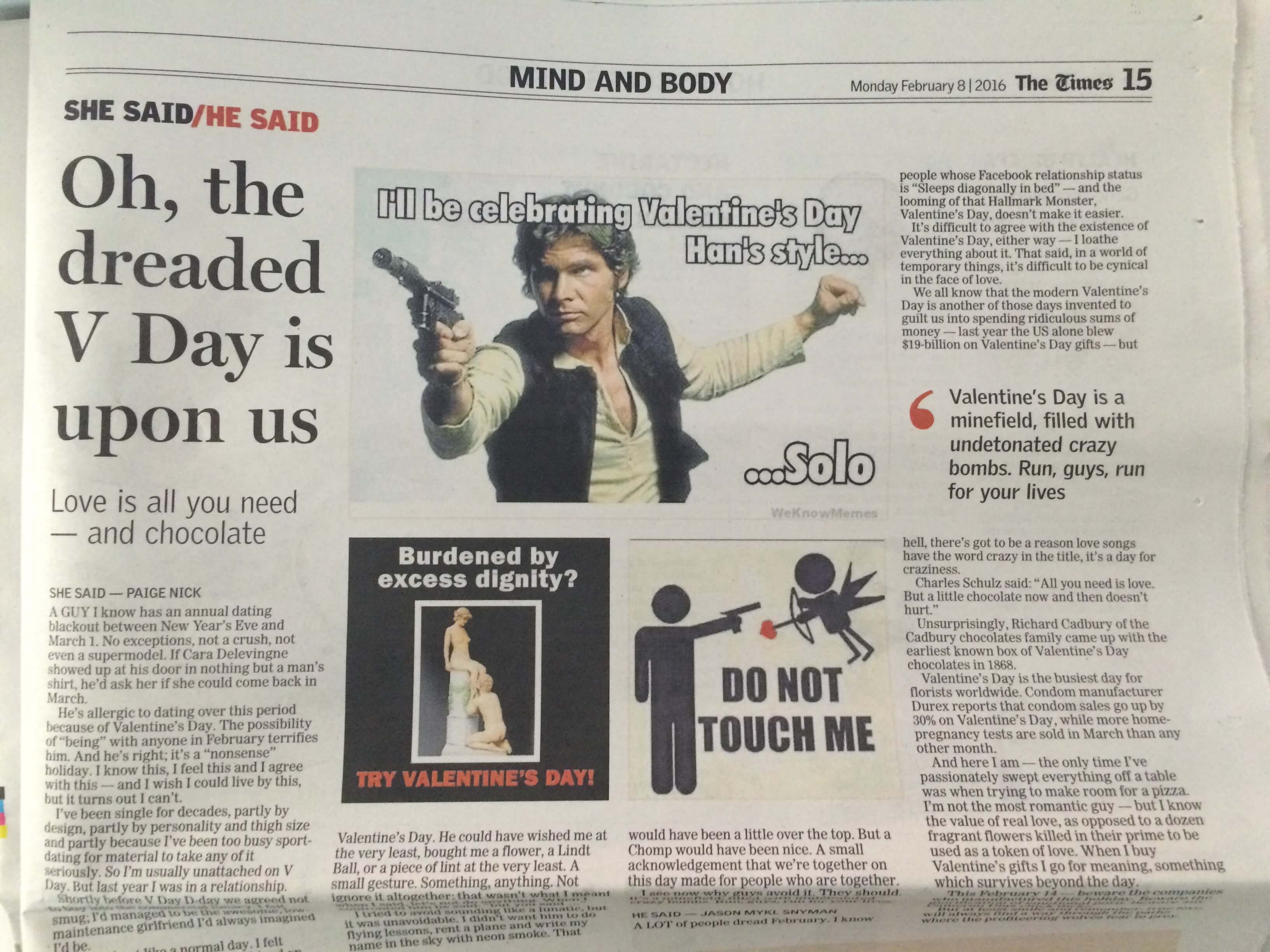 This guy I know has an annual dating blackout between New Year’s Eve and 1 March. No exceptions, not even a crush, not even a supermodel. If Cara Delevingne showed up at his door in nothing but a man’s shirt, he’d ask her if she could come back in March.

He’s allergic to dating over this period because of Valentine’s Day. The possibility of ‘being’ with anyone in February terrifies him. And he’s right; it’s a nonsense holiday. I know this, I feel this, and I agree with this, and I wish I could live by this, but it turns out I can’t.

I’ve been single for decades, partly by design, partly by personality and thigh size, and partly because I’ve been too busy sport-dating for material to take any of it seriously. So I’m usually unattached on V Day. But last year, I was in a relationship.

Shortly before V Day D-day we agreed not to buy into the commercial lunacy. I felt smug; I’d managed to be the awesome, low-maintenance girlfriend I’d always imagined I’d be.

It rolled out like a normal day. I felt bereaved. I FINALLY had a boyfriend on Valentine’s Day. He could have wished me at the very least, bought me a flower, a Lindt Ball, or a piece of lint at the very most. Just a small gesture. Something, anything. Not ignore it all together, that wasn’t what I meant when I said, let’s not do anything. When I confronted him he said, ‘but you said…’

I tried to avoid sounding like a lunatic, but it was unavoidable. Yes I didn’t want to do the whole thing. I didn’t want him to do flying lessons, rent a plane and write my name in the sky with neon smoke. That would have been a little over the top. But a Chomp would have been nice. A small acknowledgement that we’re together on this day made for people who are together.

I see now why guys avoid it. They should. It’s a minefield, filled with undetonated crazy bombs. Run, guys, run for your life.

A lot of people dread February. I know a ton of people whose Facebook relationship status is set to “Sleeps diagonally in bed” – and the looming of that Hallmark Monster, Valentine’s Day, doesn’t make it easier.

It’s difficult to agree with the existence of Valentine’s Day, either way – I pretty much loathe everything about it. That said, in a world of temporary things, it’s pretty darn difficult to be cynical in the face of love.

We all know, deep down, that the modern Valentine’s Day is just another one of those days invented to guilt trip us into spending ridiculous sums of money – last year, the US alone blew $19 Billion on Valentine’s Day gifts – but hell, there’s got to be a reason every great love song has the word crazy in the title – it’s a day for craziness.

“All you need is love. But a little chocolate now and then doesn’t hurt.”

Unsurprisingly, Richard Cadbury of the Cadbury chocolates family is responsible for coming up with the earliest known box of Valentine’s Day chocolates.  In 1868, Cadbury started selling chocolates in a heart-shaped box.

Valentine’s Day is the number one busiest day for florists, world-wide. Condom manufacturer Durex reports that condom sales go up by 30% on Valentine’s Day, while more home-pregnancy tests are sold in March than any other month.

And here I am – the only time I’ve passionately swept everything off a table was when I was trying to make room for a pizza. I’m not the most romantic guy – but I know the value of real love, as opposed to a dozen fragrant flowers killed in their prime to be used as some sort of token for love. When I buy Valentine’s gifts I go for meaning, I go for something which survives beyond the day.

But, at least smile, and remember; true love will always find a way through the paths where the profiteering wolves fear to prey.