Oh hello Monday, you again? Here’s yesterday’s column in case you missed it, and this week it comes with pictures. I couldn’t not, these were too good not to include. Hope you enjoy.

A MILLION MILES FROM NORMAL – By Paige Nick
WELCOME TO PORNO-WOOD.

So, how do you feel about pornography? Are you for it, against it, or indifferent? Sorry, but I have been writing this column for almost a year already; you had to know we were going to get to pornography eventually.

Me, I’m somewhere in-between ‘for it’ and ‘indifferent’. As with all things in life, it has it’s time and place. But whether you’re a fan, with your own vast home collection, or violently against it, you do have to appreciate the sheer artistry of it. The deep plots, the lavish sets, the clever dialogue.

The only downside is that the Hollywood blockbuster can prove a bit of a spoiler for the pornographic version of the movie. And nobody likes a spoiler. Take the porno version of the classic blockbuster, Titanic that they (re)made in Pornowood. It’s called ‘BiTanic’. If you’ve seen the original Hollywood version (or ever read a history book) then you’ll probably go into the movie knowing that the ship sinks in the end and just about everybody dies. But the bits you don’t know is that according to the ‘BiTanic’ synopsis on the internet (warning spoiler alert), the captain has sex with lots of people onboard before the ship goes down. So spoiler on the big plot points, but all sorts of fresh twists and turns that you weren’t expecting along the way. How could it not be a box orifice hit? 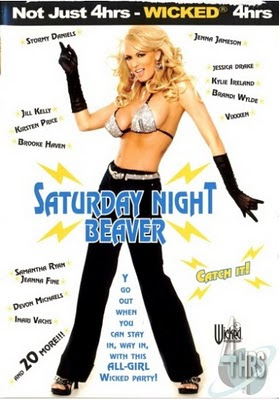 And while I’m sure Charles Dickens would have loved to hear that his books are still alive 141 years after his death, and have all been made into movies, I’m not sure that ‘A Tale of Two Titties’ is quite what he had in mind.

You can be pretty sure that where there is a blockbuster there is its pornographic doppelganger. Even popular TV series aren’t safe, what with The SoPornos, which looks like a rather graphic tale of a mafia familia that’s altogether too familiar.

There’s even a version of Terminator, retitled The Penatrator, and instead of saying ‘I’ll be back’ he says ‘I’ll come again.’ Forget Dolby, HD and Stereo, this one is in ‘Sexascope’.

And no film buff’s collection would be complete without the classic, Muffy the Vampire Layer. And starring Tom Cruiser there’s Missionary Position Impossible. I promise I’m not making this up, on the movie poster it gets ‘Two Things Up!’

What do you mean you haven’t seen any of them? And you call yourself a movie buff!

2 responses to “Welcome to PornoWood.”