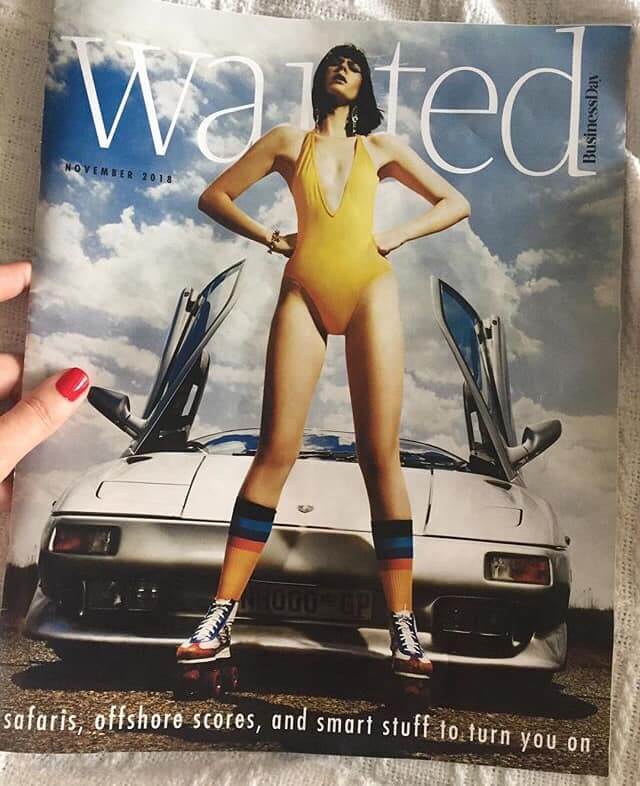 This column first appeared in Wanted Magazine on 2nd November 2018

Am I high end? I don’t lick the knife, I flew business class that one time, and I know how to use that weird cutlery for snails. But I have also been known to wear pink with red, and I just had to wipe Bovril off my keyboard, so maybe the jury is out. Ultimately, I’m just a girl, standing in front of my dating app, wondering where all the higher-end people are?

‘Z’ is a 46-year-old marketing director for a multinational corporate in Joburg. She earns around eighty grand a month, has lots of friends and is fit and active. She’s divorced and has been relooking for love in all the online places. ‘I’m not the right demographic for Tinder,’ Z admitted over a Rooibos Cappuccino. ‘It’s not serious enough for me. Not that I’m a serious person, but in terms of what I’m looking for – something more adult. Plus, I kept swiping into men I know from business, and that made things awkward at work, so I left Tinder.’
‘And then what?’ I asked.
‘You tell me,’ she said.

‘J’ is a 52-year-old property developer in Cape Town, who’s never been married and has grown up kids. He’s been on a dating website for a year. ‘The women I’ve met here so far, aren’t for me,’ he says. ‘Chancers, crazies and game-players mostly. There has to be a classier class of class out there somewhere, doesn’t there?’

If you’re straight, over forty, male or female, and doing okay in the world, where do you meet like-minded or like-pocketed individuals? If meeting someone at a mutual friend’s braai or party is the only option, who knows how long it’ll take, and these crow’s feet aren’t getting any shorter.

Let’s rule Tinder and Bumble out. They’re both well-trodden cell phone dating apps. The only difference is that on Bumble the woman makes the first move. But split-second swiping, based on looks and proximity doesn’t do the trick for an established, more emotionally mature someone. Not for lack of trying, Tinder launched Tinder Plus and Tinder Gold; in-app subscriptions to access unlimited likes, be a top profile in your area for half an hour a month, and other features, none of which excited me enough to get my gold card out and my knickers off.

Dating websites are the next logical stop. The profiles are more substantial. Dating Buzz is one of the biggest in SA, reskinned as Matchmaker. They have different URLs, but they share the same database. I’ve spent most of my single dating life here. Resulting in dates ranging from disastrous to hilarious, one con artist, a massive learning curve and some successes. But I wouldn’t say it caters specifically to high-end individuals, so it’s a case of setting your search parameters carefully and reading profiles with a considered eye.

One of the site’s interview questions covers income. Drop-down menu response options include, ‘comfortable’, ‘wealthy’ or ‘struggling’, but many choose ‘Ask me later’. I’ve learnt that ‘Ask me later’ can mean ‘Ask me later’, because I’m between incomes. Or, ‘Ask me later’ because I’m well off, but I’m not looking for a pick-pocket, so I’ll keep my financial status to myself until I’ve sussed out your gold-digger status, if you don’t mind.

There are other choices, too. Zoosk seems legitimate, although it doesn’t offer much profile info, making it more like tinder. SEO also kicked up Elite Singles. Their backslash is ‘millionaire dating’, which piqued my interest. But when I signed up, it offered to auto correct my .co.za email address to a .co.uk, which was the first flag I was hoping not to find. This tells me it’s an international site, so their database in SA may be limited. You want your dating portal to be exclusive, but not so exclusive that there are only seven local ladies on it, one and a half blokes, and the rest is Russians and bots.

The sign-up process was detailed and time-consuming, which made me hopeful. Elite Singles promises, ‘… An average age-range of thirty to fifty-five, the vast majority of our members are intelligent, successful professionals.’ Hey, I thought, that sounds like me.

But then Google stepped in to manage my expectations. There are dozens of complaints on Hello Peter about Elite Singles, as well as an article in the Cape Argus from 2017, claiming money deducted off credit cards, lack of ‘stock’, and difficulty cancelling subscriptions. Most sites make it easy to sign up and cough up, but not so easy to sign out.

Elite Singles won’t let you see profile pictures unless you subscribe, rendering free elements of the site mostly useless, and forcing you to pay without any proof anyone there actually exists. And since I signed up, both Zoosk and Elite Singles have spammed me non-stop with hundreds of ‘smiles’ and ‘waves’ from unlikely sounding profiles, few in my age range or area, so I’m not convinced.

A site called ‘Dating for professionals’, also popped up, but when I tried to sign up, it was unavailable. Tinder may be torture, but at least it’s legit.

I filled in the online form and owner, Theo Malherbe, immediately reached out to set up an appointment to meet the following day. Theo meets with all clients face-to-face, and asks twenty-three carefully curated questions, to understand what you’re looking for. Theo is all about your dating intentions, and he takes this seriously. He offers a twelve-month subscription, paid up-front, which comes with no guarantees of how many dates you’ll go on. Theo believes in quality over quantity, so you may go on ten dates or one, but you can bet your dry spell they’ll be handpicked.

97% of Theo’s clients have been on first dates. 85% – 90% of those go on second dates, and 45% are in successful relationships, with a few weddings and a mazeltov in there. “We live in a world of fast-food dating,” he says, but the bulk of his clients are between 30 and 65 and they’re looking for the Michelin-starred version.

Another high-end option in Cape Town, Jozi or Durbs, is MatchVIP.co.za, a sister offering to PerfectPartners.org.za. They share a database, but offer different packages for the more discerning dater. Ranging from VIP to diamond or platinum subscriptions.

Shannon Davidoff is the force behind Match VIP. She says, ‘We welcome enquiries from all sincere upmarket singles from all walks of life, culture, religion and background, who have attained a tertiary education, industry qualifications, business owners and academics, of all ages.’

I filled in their online form, although having to fill in my weight or BMI gave me pause. Nobody else on this journey has asked me to do that. I wondered if you’re only allowed to date in the higher figures if you have a good figure?

But since Theo meets every client in person, maybe he doesn’t have to ask you to fill that in. Shannon explained that 30% of applicants don’t make it onto their books. If Match VIP don’t feel they can match you, for physical, financial or emotional reasons, they won’t take you on. It’s not a typical stance in the dating world, which isn’t known for its honesty.

After filling in the Match VIP application, you get two detailed phone interviews, with offers of date coaching and dating therapy, before you get to the nuts and bolts of actually going on a date. When you sign on, you have to fork out R950 to have professional photographs taken with aligned photographers and studios. ‘This ensures that everyone on our books is properly presented.’ Shannon tells me. No dodgy bathroom selfies, Photoshop, filters, dick pics, or misleading snaps from ten years ago.

Match VIP will run you from three grand to thirty grand a year, depending what you’re looking for. With twenty intros guaranteed. Shannon also offers a pay-per-date option. Theo wasn’t keen to share his pricing structure, but The Only Social Club will only cost you about double a year of monthly subscriptions to Matchmaker. With a personal matchmaker, you pay for a year up front, while the dating websites offer monthly subscriptions, with discounts for longer subscriptions. But the dating websites use algorithms, while Theo and Shannon offer the personal, experienced, touch.

I’ve thought a lot about what I’m willing to pay to meet the right someone. On the dating website, I often receive rote one-liners supplied by the site, so users can let me know they’re interested in my profile but don’t have a subscription, so can’t message personally at that stage. But if you’re serious about meeting someone, surely I’m worth the lousy R200 subscription for the month, to strike up a conversation? At least with a personalised matchmaker, everyone on their books has made an investment and are obviously taking their search seriously.