Waiter, there’s an iguana in my soup.

I’m a terrible tourist. I do minimal research and generally travel to cities with no expectations, other than some vague postcard images or memories from TV or movies, filed in the back of my mind. And the knowledge that Trip advisor and Uber are on my home screen for help, and Instagram is one button and a hashtag away for everyone else’s well-framed memories of the place, should I need the steer.

Which is why, twenty minutes after I arrived in Budapest, I had to Google, ‘what is the currency here?’ It’s the Hungarian Forint (HUF), and ten thousand of them is about five hundred rand. As an aside, it’s an absolutely magnificent city, and it’s not particularly expensive, which is a blessing for us South Africans attempting to travel on the junked-up rand. But with all the zeros involved, it helps if you’re good at maths.

Despite my general ignorance, there are two things I always do plan on doing when I arrive in a new city. One is taking the hop-on, hop-off bus. I know it’s lame and touristy, but if you’re only in town for a few days, I find it’s the best way to get the lay of the land in a couple of hours, and then you can decide where you want to explore further. And more importantly you can hop off for a cocktail whenever the urge grabs you.

The other thing I always plan on doing is walking my guts out. I like to go as deep into local-territory as possible, because that’s where the real surprises are.

Which is how I ended up taking a turn off the beaten track and walking down some quiet back street in Budeapest at dusk one evening, and how I came across an odd looking place called Zoo Café.

‘What kind of tea would you like? Here’s a gecko.’ The waiter said, depositing a fifteen-centimeter lizard on my table.

All the walls in Zoo Café are lined with aquariums, cages and terrariums and the young, tattooed waiters do their rounds carrying various creatures on their sleeves and in their pockets, leaving them at each table with polite instructions (mostly in Hungarian) on the animal’s make, model, dietary concerns and care instructions. (‘Please don’t turn the turtle over.’ ‘This snake doesn’t look friendly, but she is.’ ‘That is a boy iguana.’ ‘Please don’t let the guinea pig drink your tea.’)

A couple of ancient resident cats cruise the joint too. As one cozied up to me and instantly started shedding on my lap, I worried about the reptile I was holding, I didn’t want to be that guest who ‘lost’ her gecko. But I guess, when you work in an all-you-can-eat steak buffet, after a while you get pretty tired of steak. The cats seemed more interested in the cream off the kid’s milkshake at the next table.

And so the waiters did their rounds, delivering a procession of animals. I only turned away the snakes and spiders, forgive me but they give me the heebie jeebies. In the course of an hour I had a gecko, a cat, a green turtle, a guinea pig, a huge lizard, a giant chameleon, a parrot, two toucans, a cup of tea and a bran muffin. ‘Would you like a rabbit?’ asked one of the waiters, as I was getting ready to call for the bill (he, he, the bill). 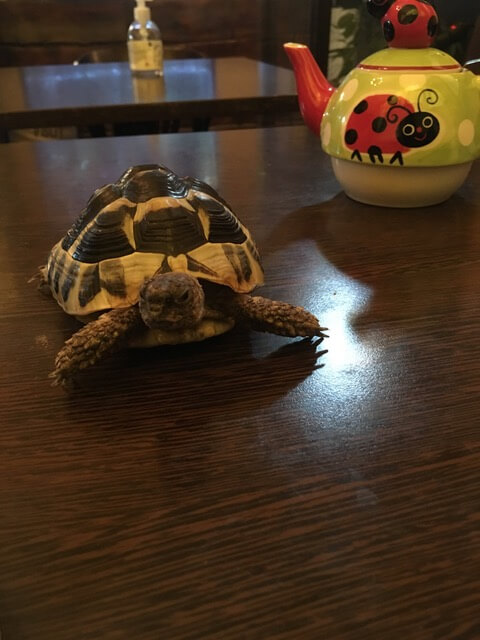 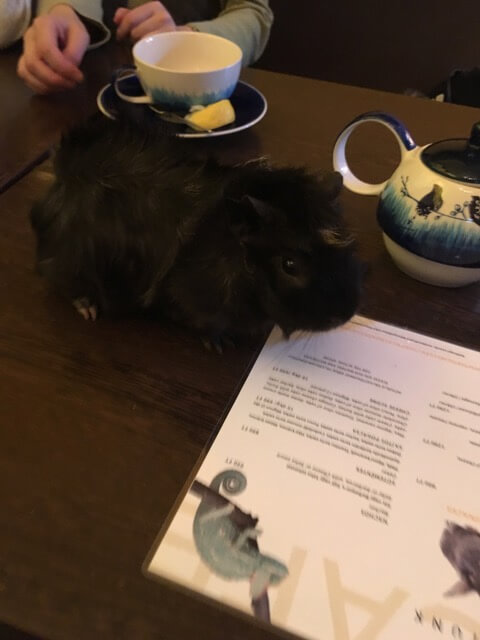 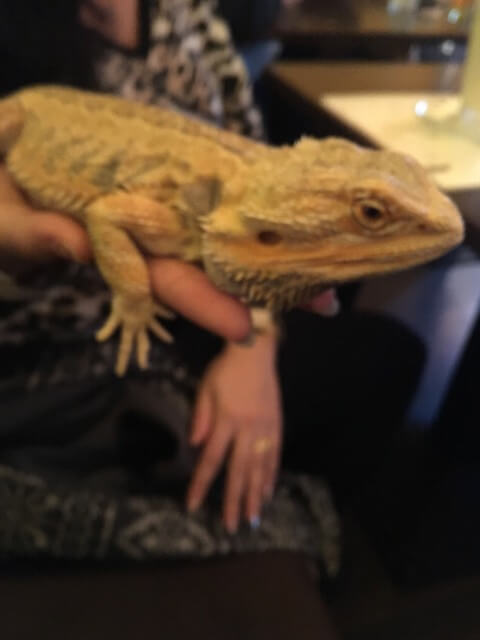 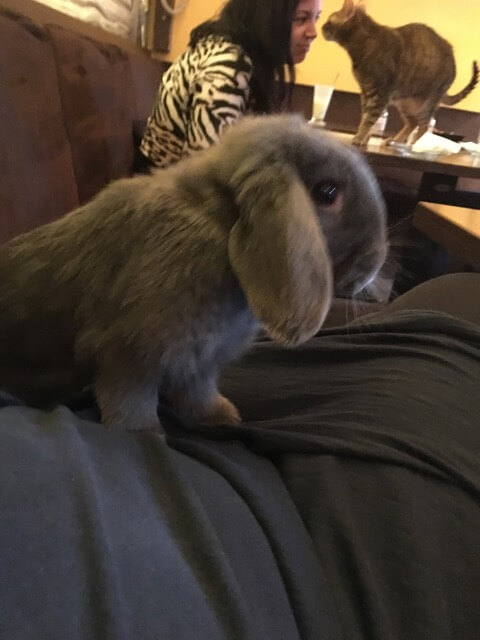 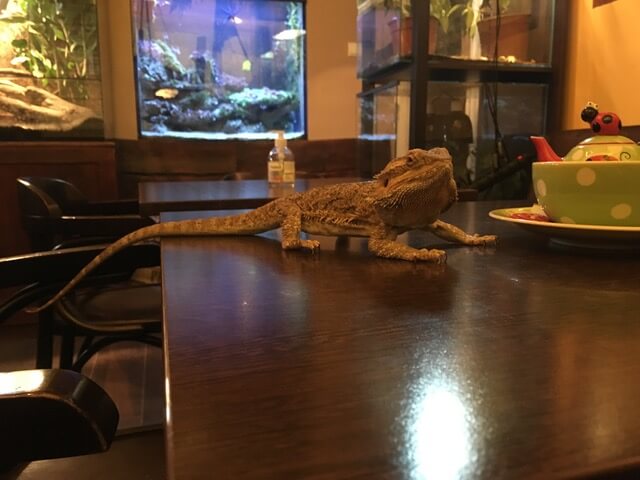 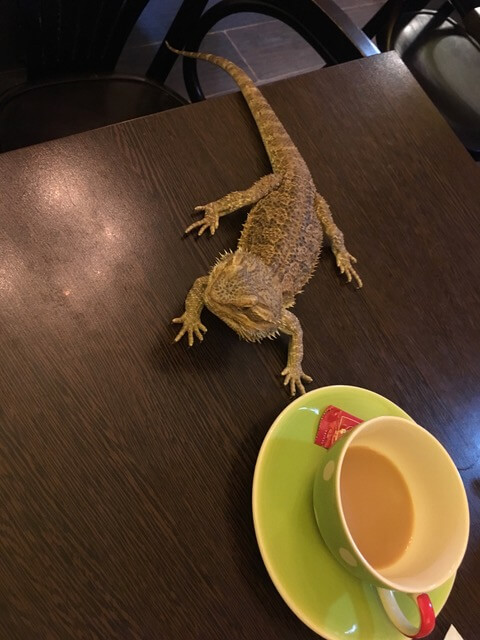 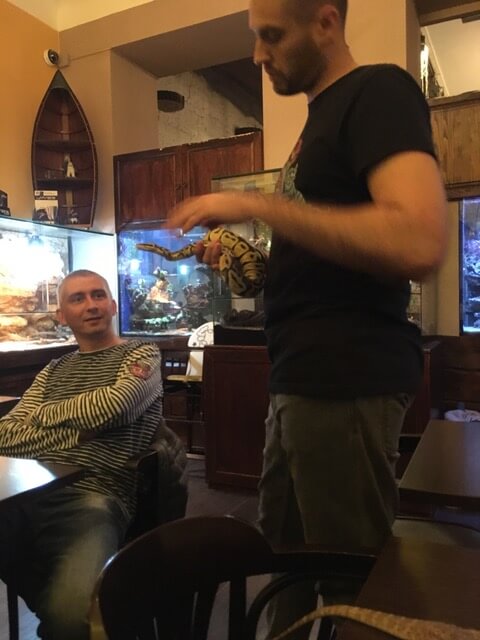 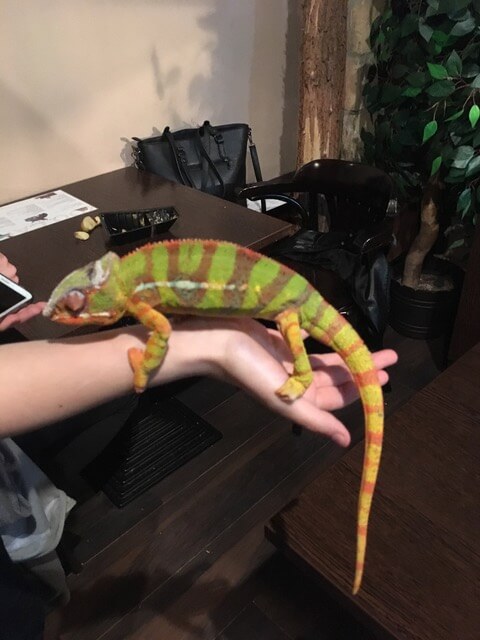 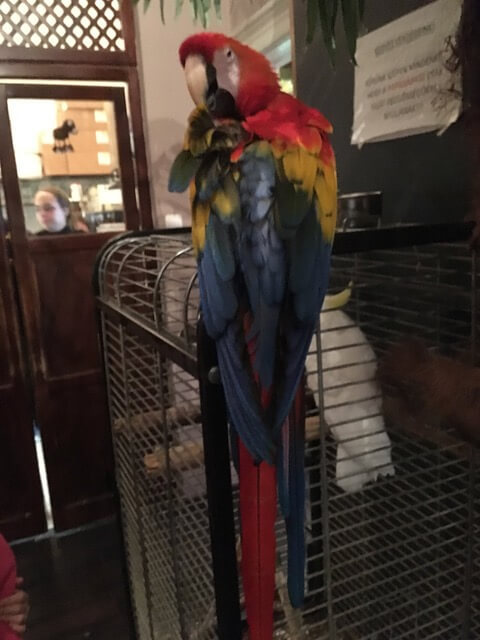 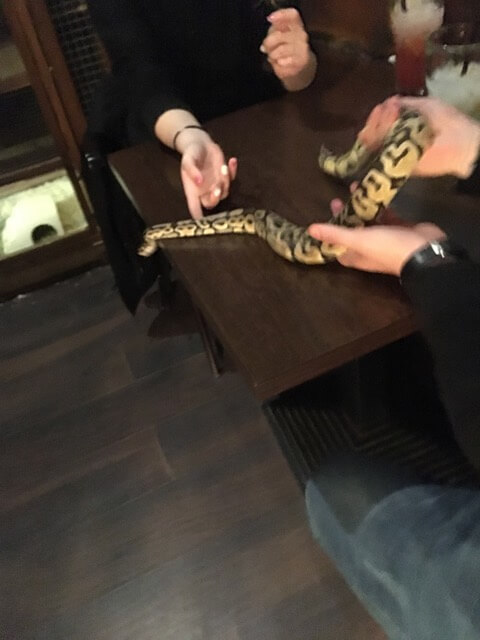 2 responses to “Waiter, there’s an iguana in my soup.”