tooth tattoos: i saw it on the internetweb, so it must be true.

ok, I’m not even joking about this. You can now get a tooth tattoo. yup i’ll type it again to save your eyes the effort of having to go back and reread that line. you can now get a tooth tattoo.
i googled it and it’s actually been around for a while (sorry, I’m a laggard). But it’s only now starting to gain popularity, as the world around us becomes dumber and eats more and more refined sugars and does too much crack.

but hold on a second, there are a couple of things i don’t understand, even after visiting several different internetwebsites on the topic.
– do they take your tooth out and then tattoo it?
– and then what? do they put it back in or do you just keep it in a box to show your friends?
– or do they tattoo it while it’s in your mouth?
– or is it a fake tooth/crown that they tattoo and then put in your mouth?
– and more importantly, why?
i’ll have to do more research.

one man online named stu, who may or may not previously have been a guest on the jerry springer show, said the following: “I’ve been tattooing teeth since the early 1980’s and depending on the complexity, it can take from five minutes to an hour or more. But i usually spend a half hour.” 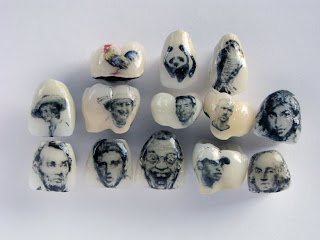 just in case you can’t see the works of art above, here’s who you’re looking at, in order from left to right: princess diana, queen elizabeth ii, simon cowell, david beckham, amy winehouse (post rehab by the looks of things), abraham lincoln, elvis, david letterman, tiger woods, george washington. oh and in the top row it’s a cock (in full colour, impressive!), a panda and an eagle.