Want to see something funny? (And does anyone ever answer no to that question?)

Click on the sideways triangle to check out this funny-cool music video.

You know times are tough when a whole band has to share one guitar.

I mean, I know we’re in a worldwide double/tripple dip recession and all, but one guitar between five of them!
At first I was a little worried that the guy on the far right wasn’t getting a turn to play, but as you can see from the frame-grab below, he kicks in just a little way into the video. Phew. 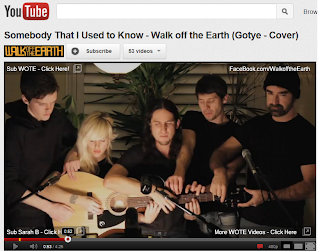 Hey, maybe if they sell enough CD’s, one day they’ll be able to afford another guitar. Or if things go really really well for them, a whole nother instrument, like a triangle, or even a drum for the guy on the far left. But that’s only if they really take off, let’s not get ahead of ourselves.
But seriously, cool band.

music video, walk off the earth, you tube

2 responses to “Times are tough”