if you’ve ever visited this blog before you’ll know that i don’t write about sad stuff. i write about smut and penises of all different shapes and sizes and bad dates and vagina necklaces. but not sad things. so apologies – i’m breaking away from the norm. promise it’s a one time only thing.

some years ago i dated this guy – we were together for just over a year. let’s just say it didn’t end well. hearts were broken. mainly mine.

anyway, yesterday i found out that he recently died after a heart attack.

these are some of the things i remember about him:

– he would call early to wake me up and say good morning every single morning we were together. he carried this on for several months after we split up. even when i no longer answered the phone, he would still call.

– he hated photographs and refused to be in them. if he was caught in one he would always manage to cover his face. which is sad, since now he’s gone i have very little physical evidence he was ever actually here. 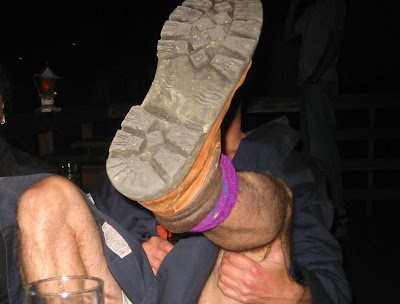 – he beat me at backgammon. a lot.

– he made a mean breakfast.

– he was forever going on missions to rescue stray cats and kittens. even feral ones.

– one night we went for a candlelit dinner in simonstown. we went for an after dinner and tequilla moonlit walk down the pier. it was very romantic, until i got my heel caught, fell off the pier and broke my arm. very glamorous, me.

– i always wondered why he happened to me. what possible reason caused him to be in my life and cause me all that pain. Then when i wrote A Million Miles from Normal (available in all good book shops from April 2010), a much fictionalised version of our story together became an intricate part of the novel’s plot. and i realised that was the reason. i was always going to send him a copy once it was published. now he’ll never know.

good bye guy.
you were a shit, but i dug you anyway.

a million miles from normal