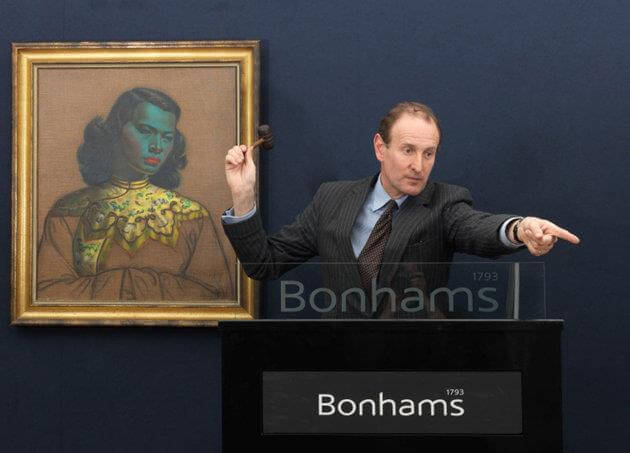 Can you smell that? It’s Monday.
Here’s yesterday’s Sunday Times Column, but is it art? I dunno, you tell me.

It was edited a little, but this is the unedited version.

Have a good one folks.

A MILLION MILES FROM NORMAL – By Paige Nick
BUT IS IT ART?

Some weeks ago a famous painting went on auction in London. The Chinese Girl was painted by the late Vladimir Tretchikoff, a Russian émigré who settled in South Africa. I doubt that when Tretchi asked one of the ladies who worked at his launderette to pose for him in 1954, that he ever imagined the painting would go on the block for millions.

As I was in London at the time, I decided to go check out the auction. I sat through the whole thing on my hands, too terrified to twitch, for fear that even the smallest nose scratch would see me bidding my life, house, car and possibly a kidney, on a landscape. Not even the property itself, simply a picture of it.

I couldn’t believe what I was seeing, as painting after painting fetched more and more cash. I’m talking huge building-sized wodges of money. Enough to show Keith Richards and Donald Trump a good time, on the same night.

In the end, the Tretchi went for just short of a million quid, which works out to about fifteen million Rand. I can understand how it fetched that much, after all it’s one of the most reproduced paintings in the world. But here’s what I don’t get, a bunch of the other paintings on auction on the same day were really butt-ugly. Like murk on canvas, or blind-man-painting ugly. You know how people always say that a five year old could have done it; well there was one painting in particular that I could only really excuse if you told me that a five year old had in fact done it. And the bidding for that one surpassed five million in seconds.

Sitting there I couldn’t come to terms with what makes one painting worth millions and another only worth cents. Who gets to say what’s good art and what’s bad art, and why should we believe them? It’s certainly not based on what the work looks like. I guess one man’s trash really is another man’s treasure. Literally.

Did you know there’s a Museum of Bad Art in America? In fact it’s so popular it has three branches. Most cities have a museum dedicated to the best art, so why not one dedicated to the worst of it too?

MOBA (Museum of Bad Art) began in 1994 when Scott Wilson, an antiques dealer, pulled a painting out of a rubbish bin on the street in Boston. Initially Wilson was only interested in the frame, but a friend convinced him to exhibit the painting. When it became popular, they asked friends to start looking out for more ‘bad art’, which they added to the collection piece by piece, never spending more than $6 on a piece. They now have over 500 artworks in the collection. All of which they say, are simply ‘too bad to be ignored’.

The trash that started it all is a visual atrocity entitled Lucy in the Field with Flowers. It depicts an old lady (well, by the title one assumes it’s a lady, but you can’t be sure simply by looking at it, it could also very easily be an old man) skipping through a field of what might flowers, but could also be big splotches of bird poop. But don’t just take my word for it, what do I know about art anyway? An American art critic describes it as: ‘an elderly woman dancing in a lush spring field, sagging breasts flopping willy-nilly, as she inexplicably seems to hold a red chair to her behind with one hand and a clutch of daisies in the other’. On closer inspection I see there is a chair, and the granny isn’t skipping but sitting. This kind of obscurity might be the beauty of this gorgeous mistake.

The MOBA curators have incredibly high, low standards. They’re not interested in kitsch works of art, like the famous ‘Dogs Playing Poker’ for example. They will only accept pieces by serious artists, who truly believed in what they’re doing, but simply weren’t able to pull it off. They’re interested in art that went horribly wrong at some point in their creation, either executionally or conceptually.

Apparently nine out of ten pieces submitted aren’t nearly awful enough to make it into the collection. But I’m willing to bet that if nobody knew who they were by, a couple of those butt-ugly pieces from the big-time auction would make it through.

Another great piece currently exhibiting at MOBA is a painstakingly created pointillist piece called ‘Sunday on the Pot with George’ (acrylic on canvas, artist Unknown). Which appears to be a man wearing y-fronts or possibly a nappy, sitting on a toilet or chamber pot. The level of detail is astonishing, and one can only imagine that it must have taken many hours to complete.

And there’s an even stranger piece entitled ‘Juggling Dog in Hula Skirt’ (tempera and acrylic paint on canvas) which is another pointillist (or should that be pointless) work. It’s a dog in a hula skirt up on its hind paws, juggling bones. Hey I know, let’s slap a big name on it and put it under the hammer at Sotheby’s in London and see how much it fetches. I’m willing to bet if it’s alongside a Tretchi and we light it well, we’ll get ten million at least.