The last big night out

Is it just me or do the Mondays come around faster than ever these days?

The only upside is that I get to post yesterday’s Sunday Times Column.

Hope you have an awesome week. Here goes:

THE BEST NIGHT OF NOBODY’S LIFE – By Paige Nick

I’m writing this at Birmingham International Airport. It’s last Friday afternoon and I’m waiting to board a flight to Amsterdam. I’ve counted; I will share this flight with no less than three different bachelor party crews.

Bachelor Party Crew number one is The Men In Kilts (TMIK). At first I thought TMIK were part of a Scottish Bagpiping team, but it’s highly unlikely they would tape a beer mug to a professional bagpiper’s hand. How would he pipe his bags like that?

Bachelor Party Crew number two ranges in age from 23 to about 60 and are all wearing orange Hawaiian skirts, multi-coloured leis around their necks and plastic coconut bikinis over their tops. And if that’s not enough of a giveaway, one is wearing a sash that says ‘Bride-to-be’.

And Bachelor Party Crew number three are all wearing blinking devils horns and t-shirts that say ‘Emma’s getting married’ on the front with each person’s name printed on the back of their own t-shirt. I see a ‘Dancing Becky’, a ‘Fun Lucy’ and a just ‘Caroline’, who I’m surprised they haven’t called ‘Unfun Caroline’. Even ‘Granny Ru’ got her name on the back of her t-shirt. These personalised t-shirt party groups are like seven elevens in Amsterdam, you see one on every corner.

I guess it’s in case they throw their name away, then when they wake up more hung-over than Charlie Sheen, they can look on the back of their t-shirt to refresh their memory. That is if they can find their t-shirt.

Amsterdam is bachelor party HQ. On the Saturday night I even spotted a group of women in the infamous Red Light District all wearing head-to-toe Burkas topped off with pink-feathered tiaras. I like to think underneath each of them was wearing a t-shirt with their nickname printed on the back.

Personally I don’t understand the appeal of bachelor parties. I’m sorry to be such a buzz kill, but I have an inherent problem with parties where there’s a built-in pressure to have a good time. New Year’s Eve suffers from similar expectations, as do milestone birthdays. It’s so important to have ‘the night of your life’ that it becomes forced. This pressure often doubled by the constant fear that the stag gang is having more fun than the hen gang. You know what we need to make sure our party is better than theirs? Another stripper and some Stroh Rum! And what if the bride-to-be got a tattoo on her face, there’s no way the men will beat that!

For me the best parties are the ones you least expect. Those nights you weren’t even planning on going out and find yourself with a few friends sitting on a croquet lawn at 4am, next to a sign that says ‘stay off the grass’. It’s when you have to force a party that people do stupid things. Because when you absolutely have to have a good time you need ridiculous props like fake coconut boobs, printed t-shirts and dwarves.

Some years ago a group of men in the UK attached a rented dwarf to their groom-to-be. Tethered to his arm, the groom had no choice but to take the dwarf with him everywhere. Even the men’s room, where the poor little guy was unavoidably penis-height (there isn’t enough danger pay in the world). At some point they lost the best man who had the handcuff keys and they had to go to the fire department to get the disgruntled dwarf cut away from the comatose groom-to-be. Memorable yes, but as the best night of their lives? Certainly not for the dwarf.

Why do we behave so badly at bachelor parties? Out of fear that once we’re married we’ll never have fun again so we’d better cram it all into this one night? Or maybe people worry that if they have a boring bachelor party the rest of their marriage will be dull? Or is it the curse of the Hangover movie franchise, which has set a ridiculously high bar of crazy for bachelor party planners worldwide. So now if you don’t wake up with a tiger in your bathroom, an STD in your trousers and an unstable Thai drug dealer as your NBF, you couldn’t have had a very good time.

Although I do see some logic in everyone getting so blotto they vomit on their shoes and can’t remember anything the next day – maybe it’s better to not remember a party at all than to remember a really crap one. 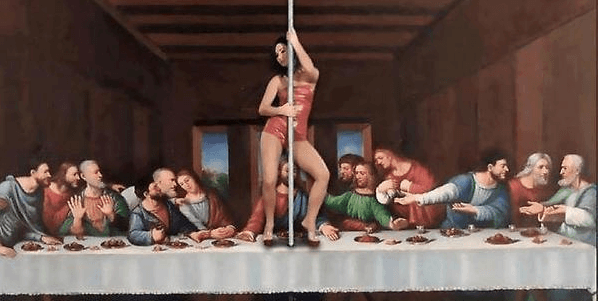 You can get a strip tease dinner in Amsterdam here