The devil's dictionary – 'S' is for Satan

Since we’re in and about Halloween time, I thought it time for another post directly from The Devil’s Dictionary. A book written in the 1800’s by a man named Ambrose Bierce. 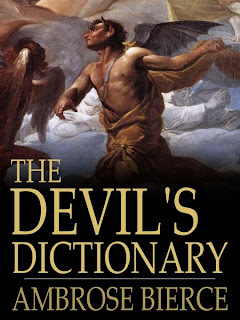 He was one of those delicious bad asses that even mothers back in the 1800’s would have warned their daughters about. And that’s what I dig about him.

So far we’ve seen ourselves from A – R and so now bring on the Smutty S’es.

Sabbath, n. A weekly festival having its origin in the fact that God made the world in six days and was arrested on the seventh.

Satan, n. One of the creator’s lamentable mistakes.

Satiety, n. The feeling that one has for the plate after he has eaten its contents.

Scribbler, n. A professional writer whose views are antagonistic to one’s own.

Scriptures, n. The sacred books of our holy religion, as distinguished from the false and profane writings
on which all other faiths are based.

Selfish, adj. Devoid of consideration for the selfishness of others.

Senate, n. A body of elderly gentlemen charged with high duties and misdemeanors.

Slang, n. The grunt of the human hog with an audible memory.

I love you Ambrose Bierce. Come now, it’s time for you to return from the dead so we can finally be together.