The Dangers of Dating

Hi friends, Romans and countrymen. Here’s the column I wrote for this month’s Edgars Club Magazine. They had to edit out a fair whack of it to make it work in the space, so I thought I’d post the whole thing, uncut, unedited, and unchanged.
Hope you enjoy.
And to Jane and Dannon, thank you for your first date story. I heart it big time.
Oh and don’t forget if you want to win a copy of either of my books check out the post below this one. 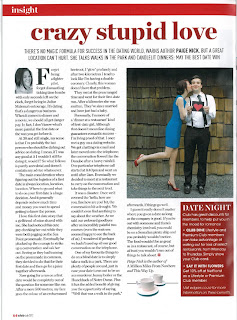 THE DANGERS OF DATING

Forget being a fighter pilot, forget dismantling ticking time bombs with only nine minutes left on the clock, forget being in Julius Malema’s entourage, dating is a dangerous business. When it comes to dinner and a movie we should all get danger pay. In fact I don’t know what’s more painful, the first date, or the bikini wax you get before the first date?

At 38 and still single, my sense is that I’m probably the last person who should be dishing out dating advice, if I was any good at it I wouldn’t still be doing it, would I? So what follows is purely anecdotal and doesn’t contain any advice whatsoever. If you want good dating advice, I suggest you track down your most happily married friends and ask them.

A girlfriend of mine has my favourite first date story. She tells how she noticed this cute guy checking her out a few times whilethey were both jogging on the Sea Point promenade; they were clearly on the same schedule. Eventually he plucked up the courage to strike up a conversation and ask her out. Seeing as they seemed to have training on the promenade in common, they decided to do that for their first date, and then go for a juice afterwards.

Now going for a run on a first date would be completely out of the question for someone like me. After just five hundred metres my face goes the colour of an embarrassed beetroot, I sweat, perspire, glow profusely and after two kilometres I tend to look like I might be having somekind of double coronary, this girl clearly doesn’t have the same problem.

So they met up at the prearranged time and went for their first date run. After a couple of metres she noticed that he was running next to her with both his hands in his pockets. She says he did it the whole way, trying to look casual and cavalier I suppose. It’s such a sweet image; it makes me laugh out loud whenever I picture it. She was smitten after a kilometre, and they’re now married and just had their first baby. Not so casual now, hey?

I think I’m definitely more of a dinner at a restaurant on a first date kind of girl, than a run a marathon kind of girl. Although for a first date, a restaurant can be a bit of a commitment. Unlike just popping out for a quick drink or a cup of coffee, dinner at arestaurant has a time frame that’s dependent on the service and busyness of the place you choose.

I once met a guy on a dating website, we got chatting via email first and later moved onto the telephone. The conversation flowed like the Danube after a heavy rainfall. I remember one particular telephone call started at 8:40pm and went on till after 2am. So we decided to go for dinner, to carry on the conversation.

It was a disaster. Once we’d covered off the hello, how are you, fine how are you, fine how are yous, the conversation dried up to drought status. In fact, we couldn’t even find anything to say about the weather. As we said our awkward goodbyes after an incredibly painful meal, (I think even the waitress was happy to see the back of us) I wondered if maybe we hadn’t used up all our good conversation on the telephone.

A great idea for a blind date is always a simple walk in a park. There are plenty of people around, just in case your date turns out to be an axe murderer, bunny boiler or the Hunchback of Notre Dame. And it has the added benefit of giving you the opportunity of saying, ‘well that was a walk in the park’, afterwards if things go well.

But I guess it really doesn’t matter where you go on a date, if the company is good. If there’s chemistry involved, you could be on a Somalian pirate ship and you probably wouldn’t notice. The food wouldn’t be as great as in a restaurant, of course, but at least you won’t run out of things to talk about.

3 responses to “The Dangers of Dating”