a twelve year old somewhere on the internetweb made herself this list: 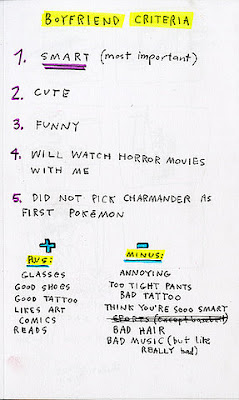 i’m wondering what i should put on my list:

MINUS –
– nasty/rude
– tells me i’m fat
– lives far away
– has another girlfriend.

hmmm yes. that’s a good list. thanks for the inspiration twelve year old somewhere out there on the internetweb, you can go back to texting now.

* unless he’s got an enormous package, or unless he’s an olympic type swimmer and only wears it when he’s doing thousands of laps in the gym pool. see ‘brave client’ there are some exceptions.

boyfriend list, how to wear your dick in speedo, internetweb, minus, plus, texting