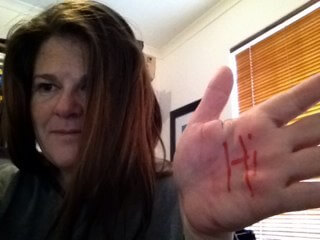 And so it turns out that the mythical ‘they’ were right; and all good things really must come to an end.

I always thought that ‘they’ were a bunch of fuckers.

After four years and four months, it’s time I bid farewell to my weekly column in the Sunday Times Lifestyle section, and instead say hello to a new monthly slot. I would have stayed on forever if I could have, but forces out of my control yadda yadda yadda.

And then there’s always the book to look forward to, it’s out in March. I’ll keep you posted on that, promise.

So here we go, this is the fat lady not quite singing, but kind of warbling:

NOT GOODBYE, JUST SEE YOU LATER – By Paige Nick

Considering I’m not on death row and what I have isn’t terminal, there are a lot of people praying for me. There’s my domestic worker, who roped in her entire congregation. The stranger who recognised me at Pick ‘n Pay two weeks ago. And Tannie Elna, from Bredasdorp, who’s posted me three hand-written letters.

They’re all praying for me to find a boyfriend, get married, and with the help of modern science, squeeze out a couple of mini-me’s in the next three and a half seconds that my eggs are still viable. Perhaps they think if I settle down I’ll stop writing smut every week.

What they don’t realise is that for the last twenty years I’ve been praying for the exact opposite. It’s not that I want to be alone forever. I’d like to have someone to share my bad taste in music and inability to whistle with. But I definitely don’t want to get married, I absolutely don’t want to live with anyone and I really don’t want kids.

One of the main reasons I don’t want kids, pets or a husband (cacti don’t count) is that I can’t stand the thought of getting too attached to anything that won’t be around forever. Cats, dogs and people have a way of waiting till you love them with everything you’ve got, then they get cataracts, their hind legs give in, or they run off with flat-chested Lisa.

So I could probably do with all the prayers I can get. You try having a long-term relationship when you’re slightly cynical and massively commitment phobic. Also, look, I’m no oil painting. By which I mean I am actually a lot like an oil painting – lumpy, best viewed under controlled down-lighting, often smeared and not everyone’s cup of tea.

Despite these shortcomings, nobody can say I haven’t put myself out there. Over the last twenty years I must have been on a couple hundred dates at least. That’s more awkward conversations, one-night stands and dumpings than I have fingers and toes to count.

Some of these were phenomenal disasters, like the time I tripped, fell and broke my elbow on a date. There was also the time at Dizzy’s in Camps Bay, where my date vomited on me. Which was actually the high point of the evening.

There have been good ones too. Like the time an IT specialist from Durbanville introduced me to his mom on our first date. He and I didn’t last three weeks, but her and I are still great friends.

For whatever reason, all my encounters have ended with a bump. Some were just bad matches, some I possibly didn’t give enough of a chance, and in many I came across like one of the seven dwarves; grumpy, crazy, stalky, aloofy, chatty, fatty or desperatey, and got kicked to the curb.

The truth is my relationship with all of you is the longest one I’ve ever been in. Despite the fact that I put out on our first date, you’ve all still shown up every Sunday for the past four years and four months to spend time with me. You’ve written to me, put up with my loose morals and dodgy puns. You’ve also taught me that I’m not great with commas and that people love to talk about sex at dinner parties. But most importantly you’ve taught me something I never thought possible; that maybe I can last in a relationship longer than a month.

I’ve also learnt that if you try avoid endings, you spend your life missing out on the middle bits. And those are often the best parts. Like that time we… [Insert romantic memories montage of the last four years, set to a popular upbeat song here]. I wouldn’t swap our middle bits for anything.

But as I feared, nothing lasts forever. Times are changing and so from next week you’ll no longer find me here every week. I’m not breaking up with you, I swear. I’ve been invited back once a month, to peddle my particular brand of smut in a guest slot in The Conch column.

And if you feel like you’re going to miss this too much, we’re also bringing out a book of favourite columns and some of the crazy letters they’ve inspired, called Pens Behaving Badly. So maybe nothing actually ends, and instead things just change. And change doesn’t have to be the awful, finite thing I’ve always been so terrified of. Especially if you’re left with new opportunities, great memories, an elbow that lets you know when it’s going to rain, and a book. I am sorry to be leaving you though. I swear it’s not you, it’s me. I hope we can still be friends?