you know what fascinates me?

have you ever actually thought about it? it’s worth exercising a couple of brain cells over. it’s the strangest concept.

let’s all take dead animals and stuff them and put them in the lounge. yes, lets.

there are a couple of different kinds of taxidermy i want to look at here. now let me just preface this by saying that i am no taxidermy pro, i’m not a taxidermalist or anything like that. but this is what i’ve gathered on the subject so far.

the first kind of taxidermy lover we’ll discuss briefly is made up of those folks who go hunting and then taxidermy whatever it is that they kill. as proof i suppose.

let’s call them ‘the hunter gatherer’ type of taxidermist. 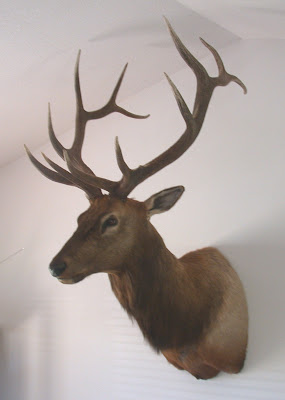 look people, this says, i am a real man. i killed this large beast, and now i make it stare out at me daily as i read my newspaper, so that it never forgets i am the king. 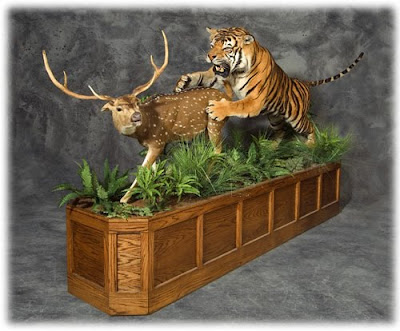 there’s even creative animal taxidermy, like this. the man (i’m sorry, but it’s almost certainly a man) thinks – let me recreate these animals as they would have been in the wild, had i not killed them with my shotgun.

in about three years time someone will show this man how a camera works and he will realise that he needn’t actually have gone to all the trouble.

i’m no fan of hunting, it’s not for me. i suppose i can sort of, kind of, maybe understand why people do it. sort of. and there’s the whole culling aspect which i’ve heard is a necessity. but at it’s basest form i don’t really think it’s so lekker. 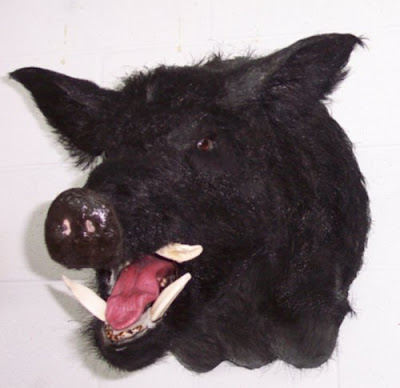 ok, enough with these, i don’t want to boar you. bwahahahahaha sorry. couldn’t resist.

next up we have the freaks and lunatics who choose to have their poor deceased pets taxidermied.

you would be astonished, amazed, awed and appendaged (sorry, needed another word starting with ‘a’) to discover how many people are really into it and how many companies there are just waiting to shove a handfull of sawdust up fido’s ass when he pegs.

in total there were 222 000 results for ‘taxidermy pets’ on google.

but this one is my favourite by far:

I love how they all have little pay off lines.

like ‘The Perfect Plan for the Perfect Pet’, or ‘Because only a true friend can leave paw prints in your heart’.

they’re so soppy, i think they should be more real, if i had one of these company’s my pay off line would be something like:

‘Keeping Fluffy Fluffy for all eternity.’

‘At least he’ll never chew on your shoes again.’

etc etc, you get the point

here are some pics and comments from all the happy customers over there at Perpetual Pet: 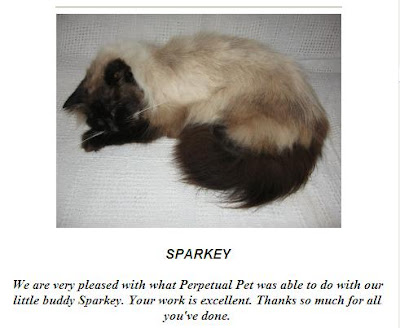 not so sparkey anymore, hey sparkey? they might have to quickly change her name to unsparky, or sleepy, or comatosey or something like that.
and here’s another satisfied customer, in the form of naomi’s folks: 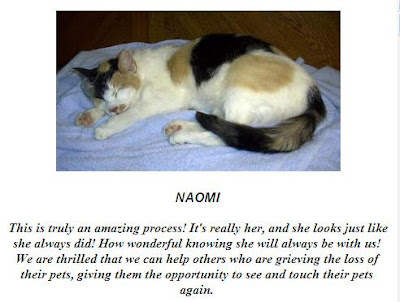 gross folks, you shouldn’t touch that, it’s dead! what is wrong with these people? it’s not a pet anymore mr and mrs naomi, it’s just another ornament you’re going to have to dust. you seriously need to consider moving on. maybe buy a puppy.
speaking of puppies: 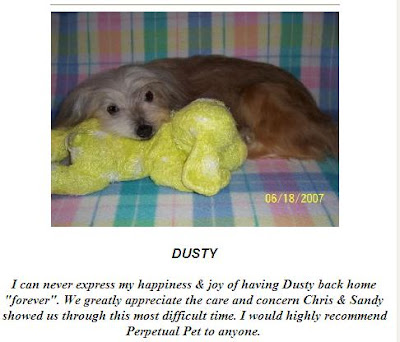 oh dear, poor dusty. i must say he looks remarkably alive for something that’s DEAD! i think it would really creep me out to have dusty staring at me through unblinking eyes from across the room “forever”. and you just know he’s going to make a shocking watchdog. at least you don’t have to take him walkies anymore.
what’s next folks? taxiderming a spouse or loved one?
hold on a second…
okay phew, i just checked on google – nobody
seems to be doing it quite yet, thank goodness.
although, i suppose if hubby only ever sat on the couch reading the paper while he was alive, there’s no reason why he shouldn’t continue it into all eternity. he could even make himself useful for a change, i mean he’s never going to wash the dishes or take out the trash again, but he might make a good hat stand. i’m just saying…