someone (i forget who, sorry if it’s you and i haven’t credited you, memory is not what it used to… huh, what was i saying?) tweeted an article about an american couple who were arrested for giving their children tattoos. 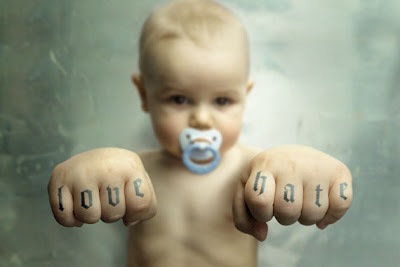 it’s so bizarre i copied and pasted the article as is below in purple, my comments are in black.

A northwest Georgia couple that was arrested for giving six of their children homemade tattoos say they didn’t do anything wrong. The kids, they say, wanted the tattoos to be like Mom and Dad.

oh OK then, if that’s why they wanted them! mom and dad have wrinkles, debt and drug habits, do the kiddies want those too?

“I’m their mother,” Patty Jo Marsh said late Saturday. “Shouldn’t I be able to decide if they get one?”

uh… no! you don’t patty jo marsh. why? because you’re a fool, and you didn’t stay in school and you do to much crack! that’s why?

Georgia law prohibits tattoos from anyone other than a licensed professional. Children under 18 are also prohibited from getting tattoos.

Marsh and her husband, Jacob Bartels, did the tattoos in their Summerville home. They cleaned up a tattoo machine someone gave them, and used guitar strings as a needle. Out of the seven children in their custody, only the youngest child did not get a tattoo.

“They weren’t hurt by them,” Marsh said. “We would never do anything to hurt them.”

no, we’d just scar them for life, that’s all. said Marsh as he picked his nose and wet himself at the same time.

Marsh said the children, ages 10 to 17, wanted the small cross tattoos, and the couple did them after Thanksgiving

. But when two of the children spent a weekend after Christmas with their biological mother, she reported it to the police.

BIOLOGICAL MOTHER! this just gets more bizarre, you tattooed children that didn’t actually come out of your own womb! really? just when i thought it couldn’t get any more unforgivable. or am i being a prude here? imagine sending your kids off for xmas hols with dad and step mom and they come home with tattoos. wahahahaha funny. until it happens to you.

at least 10 police officers searched the family’s home on Dec. 28, Marsh says, and she and her husband were arrested and charged with cruelty to children, reckless conduct and tattooing, something Marsh didn’t realize was illegal.
“If we knew that, we wouldn’t have done it,” Marsh said.

you must have missed that day at school.

The couple bonded out of jail Friday, and now is awaiting a court date. DFACS temporarily took the children out of the home, Marsh said. But now all of the children are home.
Marsh says she feels that the entire incident has gotten blown out of proportion.
“If I’m such a bad parent, then how come they brought the kids back right after I got out jail?” Marsh asked.

if you don’t believe that this kind of shit is happening out there, the original article is over here.