spam. the only thing worse than telemarketers. except at least you can delete spam. telemarketers, especially the ones from cell c, continue to call back long after you’ve trashed them.
so my computer has decided to step things up a notch. i now recieve french spam. ooh la la. fancy hey.

now here’s something you didn’t know about me. i did french at school. really, i did.

i sat next to ‘surfer chick’ of the smoking dope in afrikaans class fame – http://amillionmilesfromnormal.blogspot.com/2009/07/alliterative-weekend-away-in-worcester.html.
we were way more vigilant in french class. we never smoked dope in the bathrooms. however the teacher was strange, and shouted instead of speaking, flinging spit across the room with every conjugated verb. the classroom was set up with benches pushed together. so come test time we would leave the text book open between us on the bench, and c’est voila. D’s for everyone! (even cheating we weren’t that smart!)

so this is why i am able to translate the spam below for you. you’ll find my direct translations in purple, and my comments in brackets in black below the actual mail: 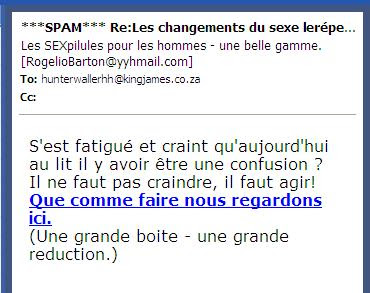 TITLE: ***SPAM*** (duh! it’s one of those words that’s obviously the same in french and english.)

Re: Even people with leprosy can have a sex change.
SUBTITLE: sex pills for your man – if your lady friend is game.

and it’s from a man named rogelio barton, to me and another man named hunter waller hh.
(i don’t know either of them, just in case you were curious about that.)

voila! monsieur … um… er… ‘spitty’ (anyone remember our french teacher’s name?) would be so proud.

shame, rogelio must have cc’d me by mistake. hunter waller must be mortified that we now all know his secret.

hunter waller hh, i suggest if you want to be a girl, you should buy some tits, wear a dress and tell rogelio barton to fuck off. what kind of friend is he anyway, blabbing your secrets to the world.