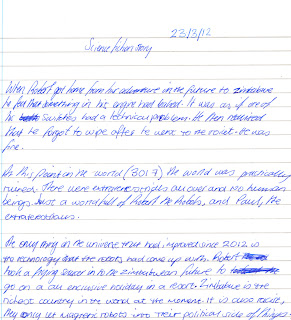 And here’s a translation for those of you who aren’t fluent in 13 year old’s handwriting:

‘When Robot got home from his adventure in the future to zimbabwe he felt that something in his engine had leaked. It was as if one of his switches had a technical problem. He then realised that he forgot to wipe after he went to the toilet – he was fine.

The only thing in the the universe that had improved since 2012 is the technology that the robots had come up with. Robert took a flying saucer into the Zimbabwean future to go on a an exclusive holiday in a resort. Zimbabwe is the richest country in the world at the moment it is also racist, they only let magnetic robots into their political side of things.