well it’s about a week and a half into being back at work, and i can’t say it’s getting any easier. around about 2:30 every day i start looking around for my nap and my gin and tonic.

i suspect as we dig further into january it will get easier to get back into the swing of things.

i found this sick note that some chap brought in to his work and i think it’s perfect. i might have to give this traditional healer a call. wonder if my boss would be cool with this: 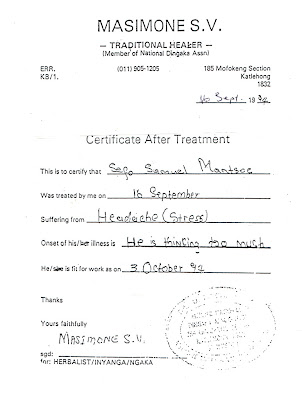 see boss, Sefo Samuel Mantsoe could not come in to work today because he has a headache, which was caused by stress, which was in turn caused by the fact that he has in fact been ‘thinking too mush’.

i can relate. i think that’s my problem too, i have definitely been thinking too mush.

i absolutely love that he was treated on the 16th september and his traditional healer believes he will only be fit to go back to work on the 3 october. that’s one hell of a motherfucker of a headache. poor Sefo.