This column first appeared in The Times on 9th January 2017.

SHE SAID – By Paige Nick

Ever notice how guys have a ton of unwritten rules? Some of them even rhyme, like ‘bros before hoes’. Probably just so it’s easier for boys to remember them.

They’re like the Ten Commandments for men; Thou shalt not look upon another man’s willie when thine doth pee. Thou shalt not take thou brethren’s last beer, etc, etc.

The strange thing is that I could instantly think of half a dozen Guy Codes off the top of my head, but there aren’t any Girl Codes that strike me immediately. There’s the whole sloppy seconds thing; you never get with a guy your friend has been with. But that’s more a health and safety and anti-gross-out requirement than any kind of rule.

Did you know that according to official ‘Guy Code’, two men aren’t supposed to share the same umbrella? And if one guy sees that another guy’s fly is down, he should pretend he hasn’t seen it. Guys are weird. Us girls will share everything from lipstick to nipple pasties, if we have to.

Why all the rules, guys? Aren’t you supposed to be the more relaxed gender? There’s also that one where if you’ve known a guy for more than twenty-four hours, his sister is off-limits forever (unless you’re willing to marry her). I once had a brief thing with a friend’s brother, and nobody seemed all that bothered about it, besides a little ribbing at his twenty-first. Although I checked on Urban Dictionary, and apparently that’s also a no-go, according to the official ‘Girl Code’. Whoops. Sorry. Not sorry.

Maybe it’s that thing where guys don’t get subtleties as well as women do, so they need very strict rules in place, so that the lines are clearly drawn for them. Whereas for us, if another woman comes out of the ladies room with her skirt stuck in her knickers, you tell her. Or if a friend and her boyfriend break up, you don’t bad mouth him for at least three months, in case they get back together again. That’s not a Girl Code folks, it’s just common sense.

Dante Alighieri, in the Divine Comedy, listed the nine circles of hell. Limbo, Lust, Gluttony, Greed, Anger, Heresy, Violence, Fraud and right down at the bottom, a place with the slowest Wi-Fi imaginable – Treachery. The depth of hell to which one is banished is determined by the severity of the crimes you have committed in life, and perhaps the worst of all crimes are the crimes against fellow man. And I mean that literally.

There are rules that govern the way a man behaves toward another man. A guy code.

If you’re gonna get weird at the gym and call other guys ‘babe’ – there’s a special place in hell for that. If you encroach on urinal space or try to strike up a convo while another dude’s got his Johnson out, your one-way ticket to hell is booked.

Don’t try to nail your buddy’s mom, and change the sheets when you use a bro’s room to score his sister. It’s only decent.

Don’t drink the last beer in another man’s fridge, and if he lends you his car, don’t bring it back with the petrol light on. Stop bumming other dude’s cigarettes. There’s a cold place in hell where all the lighters don’t work.

Pick up the bar tab when it’s your turn.

Don’t make eye contact during a devil’s three-way and never, ever, look upon another bro while he’s in the buff. Don’t go straight for the groin in a fight – what the hell’s the matter with you, bro? You’re no bro of mine.

Don’t go back on your word, don’t cock-block and don’t talk smack about another dude behind his back, especially not in front of women. Don’t be overeager with high-fives and don’t be the guy who lingers in a bro-hug.

Most important of all – never make a move on another guy’s girl, ex-girl or prospective girl. You will not pass GO. You will go straight to hell, and along the way, you will collect a savage throat punch.

Honour the code. Without it, we’re basically just animals. 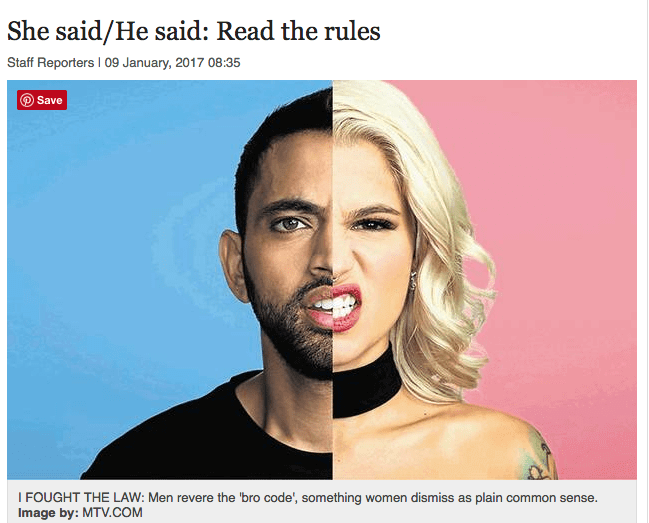