This column first appeared in The Times on 14th November

She Says/He Says is a monthly Times Column where writer, Jason Mykl Snyman and I discuss different topics from a woman and a man’s perspective. This month it’s gender swap. What would you do if you were the opposite sex for a day?

SHE SAID – By Paige Nick

I don’t know about other women, but I spend a lot of time wondering about men. Perhaps it’s because I write about sex and relationships, or maybe it’s just human to wonder about the things we don’t understand, part of the process of attempting to unravel them. In my case, it’s a life’s work.

So If I was a guy for a day, I’d like to spend that day trying to get to the bottom of some of the things I wonder about. I may need more than a day though.

For example, do men ever think about other things while they’re having sex, like women do? I don’t mean thinking about your mom or a decaying corpse when you want to delay matters. I mean do random things pop into your head, like your next bond payment, or whether those shoes you left for mending at Premier Shoes two months ago will still be there when you eventually make it back?

And if I was a guy for a day, I’d really like to get sick. I want to know if man flu actually hurts more, or whether guys are just big freaking babies.

Does it feel weird if you sit on your testicles by accident? Is that even a thing that happens to you? Come on, it must be.

What’s it like to orgasm every time you have sex? Are you sure you can’t multi-task, or are you just trying to get out of doing stuff? I also want to watch Formula One racing, cricket and soccer while I’m a man, to see if I suddenly enjoy it.

And when I’m a man for the day and I orgasm every time I have sex, and try not to sit on my testicles, while I watch lots of sports on the telly, while I’m really sick, I hope I have a woman around to look after me. I also hope that when Jason gets to be a woman for the day, he has his period.

HE SAID – By Jason Mykl Snyman

These are the obvious choices. Men would ogle themselves in the mirror all day and women would pee standing up. I’ve seen women pee standing up, don’t ask me where or when or why, but this is already well within your capability, ladies.

So here’s the question;

What would I do if I were a woman for just one day?

That tiny window suggests I wouldn’t be facing the repercussions of a tomorrow.

With that in mind, I would teach my vagina to smoke a cigar. I’d walk around topless. I’d manipulate men into buying me stuff. I’d say stuff like “gotta go polish the petunia” and then back my car into the mailbox. I would cry, all the time. I would cry in public. I’d cry to get out of speeding tickets. I’d treat all the nice guys badly. I’d burn all my bras. I’d be a lesbian. I’d delight in finally knowing how to use an iron. I’d start unnecessary, irrational arguments with everybody. I’d do all the things I couldn’t do when my testicles were in the way, like sitting down without caution. I’d finally watch Brokeback Mountain and not feel weird about it.

I don’t know. Being a guy is easy, I don’t know if I’m up for all that shaving, waxing, plucking, rinsing, lathering, repeating and feeling feelings, even for a day. 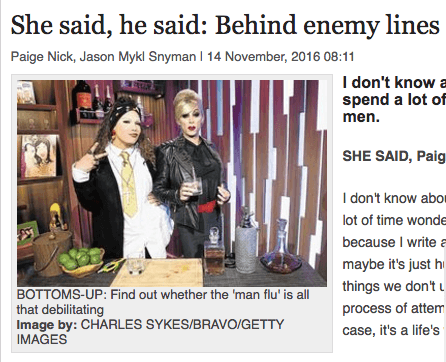