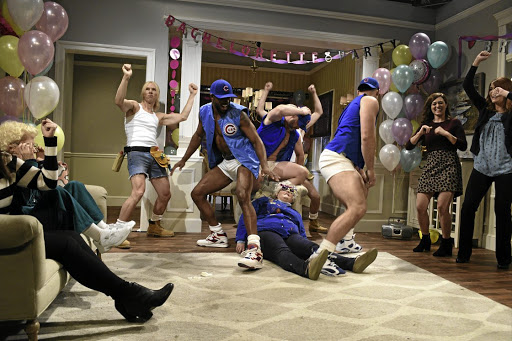 This column first appeared in The Times on 11 September 2017

I’m so competitive that I feel like bachelor and rette parties are a big competition to see which sex has a better, bigger, later, more fun night. In cliché-land, the men get together, dress the groom-to-be in a skirt, attach a plastic ball and chain to his ankle and duct tape a beer glass to his hand. And the women drink too-sweet champagne out of penis straws, do karaoke, and later hold the glowing, gorgeous bride-to-be’s hair back while she alternately sobs and voms. And nobody can go home before four am, because this is a competition, people. Best-case scenario.

Worst-case scenario there’s also a stripper. Although, maybe that’s not a worst-case scenario for guys. I’ve seen the strippers out there, there are plenty to choose from, most of them super-model hot, brilliant performers who know what they’re doing.

But for a while, when we were going through our wedding phase – that three to ten year patch – when all the weddings in your group happen (about fifteen years before all the divorces and day drinking happens), there was only one male stripper in Cape Town.  Or that’s how it felt. Every bachelor party we went to, there he and his g-string were.

I don’t remember his name, Officer something or other when he came dressed as a cop-stripper. He had a nice enough body, but I’ve got to be honest, he was horizontally challenged, with long curly brown hair that fell down his back, like a Mills & Boon cover, which wasn’t a look for everyone. And it was always an excruciating twenty minutes when you tried not to make eye contact, so he didn’t grind up against your lap (good thing we could sit for the show, so he could reach).

But that was years ago, I’ve been to Beefcakes recently, there are tons of hot male strippers now fortunately, because if I’m forced to go to another bachelor party, us women had better be the team that wins the night.

HE SAYS: By Jason Mykl Snyman (who you can find here)

I’ve been to some pretty morbid bachelor parties involving scrap-booking, cross-dressing shenanigans and strippers who accidentally got into the cake before it was baked.

There’s a traditional recipe for a successful celebrotion. Lots of booze and a naked chick on a pole. Yawn. It’s been done to death.

I once attended a strip club where, mid-table dance, the dancer bumped her head on a wall-mounted lampshade.  I burst out laughing and she forced me to turn my chair around and stare at the wall. Since then I’ve just been disillusioned with the whole thing.

Now, I’m not one to discourage lap dances. Lord knows it beats the hell out of drinking through one of those bachelorette penis-straws, but come on; you can do better than that, can’t you? The general themes surrounding these parties are usually something Ho-rrific! and Douche-tastic!

Hunting, whiskey tasting, camping, taking a road trip – it doesn’t really matter – the only goal here is to make the groom vomit and pass out so that you can shave one of his eyebrows off before the wedding day.

Maybe put him on a train without any clothing or money. Those hysterical phone calls are classic. Or put his leg in a cast and tell everybody he broke it falling out of an Uber. The wedding photos are hilarious.

The bride’s reaction, less so.

Let’s pump the brakes here and consider for a moment the real reason you’re out on a stag do. Oh yes, that’s right. You’re getting married. This is supposed to be in commemoration of your upcoming nuptials, not one final debaucherous romp.

People seem to view the bachelor/bachelorette party as some sort of final hall pass before they tie the knot. An excuse to have sex with a single-mom stripper or dance up on some Enrique Iglesias-looking bartender.

I don’t want to get my friend a stripper who can put her ankles behind her head. If it comes to that, he’s getting an ugly one. According to Men’s Health magazine – two out of three people cheat on their future partner on party night.

I’m not taking any chances.