sex in the afternoon

nothing wrong with a little sex in the afternoon, right?

i went to a play about sex yesterday afternoon. a matinee. when last did you do that?

the matinee, not the sex in the afternoon, i mean.

The Blue Room was written by David Hare, directed by Yvonne Copley and was showing at The Intimate Theatre in Gardens. 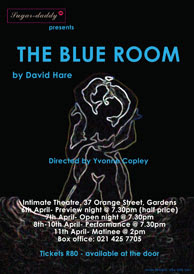 chappies moment: did you know, The Blue Room was first performed in London in 1998 starring Nicole Kidman.

i can’t remember the last time i saw a play. naughty naughty, rather lacking in culture some might say.

anyway i thoroughly enjoyed this one.

it’s very cleverly written and made up of a series of scenes, each about 10 – 15 minutes long, with each scene holding just two characters.

the play takes a simple revolving form. each scene is cleverly linked by a character from the previous scene. So A has sex with B, then in the next scene B has sex with C etc etc; with a little circular twist at the end.

i mean, i’ve heard of the missionary position, but never the circular position.

it has a cast of three, each of whom take on three different personas each, including a prostitute, a politician, a cab driver, a model and then throw in a couple of lesbians for good measure.

i loved the way each of the three actors seamlessly moved from character to character. it can’t be easy being a politician’s wife one moment, and a seventeen year old girl the next, but talented actress, Tamryn Spiers, seemed to take it a hundred percent in her stride. the same goes for Spiers‘ co-stars, Patrick Walton and Marlisa Doubell, who i thought did a fantastic job.

there was lots of clothes off and clothes on, but who doesn’t like a bit of that.

it was a great play, and a lekker thing to do on a sunday afternoon. although by the end of it, for some reason, i felt like i needed a cigarette!