there are some major differences between boys and girls.

some are more obvious.

like: boys have penises, girls have brains.
or
girls have boobs, boys don’t know how to listen.

and then there are the more subtle differences.

take ‘doomo’ for example. he’s a very lovely but typical brand of boy who sits behind me at work.
the other day at around 3pm he went in for a bit of an afternoon snack, as he does. a packet of chip type things.

he pretty much inhaled them, so by the time i got there the packet was empty. 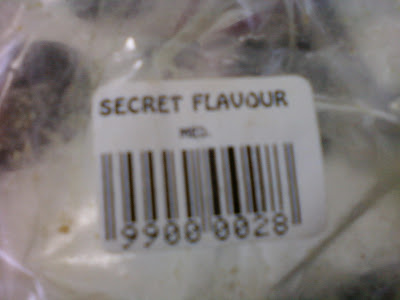 apologies for the laggard pics. 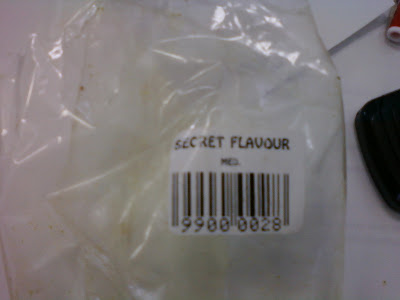 ‘secret flavour’ chips. really? the flavour is a secret? that’s just wierd. i may be wrong but i don’t think a girl would ever buy secret flavour chips.
is the flavour a secret to the manufacturer? did someone find a jar of flavour without a label and nobody could guess what it tasted like so they just labelled it secret?
or do they know what it is but they want to keep it a secret from the consumer. and why? why would they do that? what’s the marketing strategy behind that?
it just doesn’t make any sense to me at all. how can you crave something that’s a secret?

when i hear the words ‘secret flavour’ i instantly wonder if they’re something wierd like feet or toe flavoured.

i really can’t imagine buying anything like that. or am i just being a girl about it?
pity he’d already finished them so i can’t even describe the flavour to you even if i had had the guts to try them. so as per the manufacturers wishes, how they taste remains forever a secret.