Here is yesterday’s Sunday Times Column, just in case you didn’t get to see it. Enjoy. PS: This is the last Sunday Times column of the year, we resume on 2nd Jan 2011.
Here’s something you may not have known. Japanese farmers, slash scientists, slash fans of Frankenstein, slash guys who spend a little too much time in the fruit and veg aisle at their local supermarket, have created, slash invented, slash grown square watermelons.

I kid you not. This is a true story. I saw it on Wikipedia. You can even go Google it, if you don’t believe me. 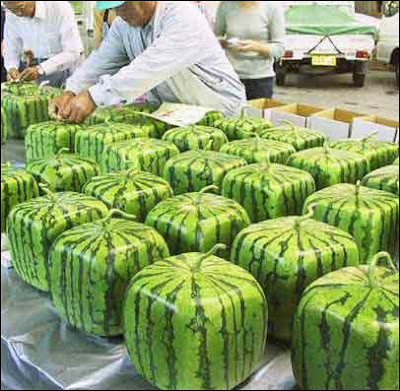 It all started when someone with lots of brains in their head realised the home-grown truth, that there’s never enough space in the fridge for a watermelon. And also, when you buy one, it always ends up rolling around in the boot of your car when you drive home, squashing the eggs and the loaf of bread and the only ripe avo you found in the avo bin, after painstakingly squeezing the 70 other hard ones surrounding it.

While undoubtedly delicious, juicy and nutritious, watermelons in their current format are an incredibly inconvenient fruit. They don’t fit in a lunch box as, say, an apple or a banana does. And if you drop one on your toe, you’ve got serious problems and some doctor’s bills to contend with. Ever try cutting one? It’s not an easy thing to do without severing one of your own fingers. Perhaps one of the reasons we were given 10? Chop off one while you’re trying to cut a watermelon, and you’ve nine more lined up to do the work.

These new square watermelons are also more green (if pieces of fruit can possibly be more green than they already are), because they now fit exactly into the supermarket fridge without wasting space, so they take less gas or electricity to refrigerate. They also take up less room when it comes to transport, which equals fewer trips for the truck driver from the farm to the supermarket, so more saved energy. It’s actually a very smart idea.

How they did it was to take watermelon seeds and grow them in square plastic boxes, so they were forced to grow into the shape of the box, instead of the melon’s natural gravity-induced oval shape.

I don’t want to blow our own horn or anything, but us humans are pretty amazing when we put our minds to it. Even the guy upstairs couldn’t come up with this one by himself.

You see, I begin to have some concerns when it comes to organic genetic engineering and mutation. I have to question whether it’s a good idea to mess too much with nature.

What if it’s one of those things that seemed like a good idea at the time, but when we’ve messed with watermelons too much, they begin to grow minds of their own in their pips (pip is a slang word for brain after all), and they rise up against us humans, murdering us in our sleep and re-growing us in different shapes using plastic boxes, so that we can fit better in their mutated refrigerated storing devices? I’m just saying, it could happen.

I feel the same concerns about Botox and all those other crazy procedures we use to push and pull at our skin and reshape women until they’re barely recognisable and supposedly younger versions of themselves.

Perhaps it’s time we stopped screwing with nature. Either that, or we’ve just got to hope like hell that it doesn’t come back to bite us on our massively liposuctioned butts. 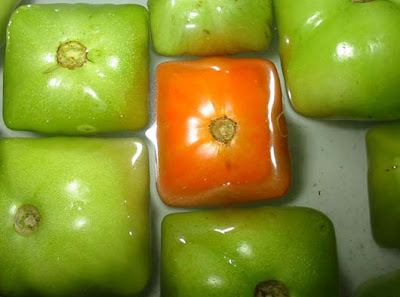