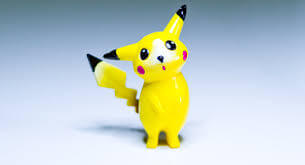 Suddenly Pokemon Go is better than sex. I personally do it as often as I can. Not Pokemon Go, I’ve never done that, I mean sex.

Bizarrely, three weeks ago, none of us had even heard of it, and now it’s the biggest wank on the net. In Japan, one of the Pokemon characters, Pikachu, is as popular as Mickey Mouse.

The web used to be controlled by cats, pornography and the Kardashians (not necessarily in that order), but the power is shifting. Pokemon is the internet’s new huge throbbing penis.

In terms of Google Trends, every term you type into the computer is scored for it’s popularity in comparison with all the other terms people type in. With 100 being the highest any term can go. So, let’s call 100 the money shot. On 11 July Pokemon hit the money shot, just six days after it’s release.

Pokemon Go was downloaded more times in one week than Tinder, the world’s biggest dating app. Which is interesting when you consider all the similarities between dating and playing Pokemon Go. I once dated a guy with a tiny Pikachu, but he had a giant pair of Jigglypuffs.

In both dating and Poking, you run around various locations trying to find the best match, collecting a bunch of them in the process. There are short ones, tall ones, pink, yellow and brown ones, cute and ugly ones. You can find these matches just about anywhere; at the park, gym, laundromat or library. But you have to be careful, there’s a dangerous side too. There’s no shortage of creeps out there and you might bump into someone else chasing the same match as you and then you’ll have to fight them off. Sound familiar, all the single ladies? And also, no matter how many great ones you find, you’re always wondering if there isn’t a better catch waiting just around the corner?

With all these similarities, there’s no surprise that now there’s Poke Dates, a Pokemon Dating website that uses your personal details, and of course your Pokemon preferences to find a match in your area, and then sends you both to a PokeStop to meet up (for 20 bucks a pop). The only problem I percieve is that in order to look into each other’s eyes and fall in love, ‘players’ will actually have to look up from their phones at some point, and we all know that’s unlikely to happen.

What this massive shift in Google trends means, is that the world would suddenly rather chase around hunting imaginary cartoons, than download (another) video of Kanye and Kim doing it. I can’t tell if that means that we’re maturing or regressing.