on sunday night a woman on carte blanche married her dog. and now this.

crazy extreme, inappropriate pet lovers, what the fuck happened to you?

were you dropped on the head? did you sniff detergent? or are you just not getting laid enough? i don’t get it.

here we go, you couldn’t make this shit up. please meet people who paint their cats.

yes. they take paintbrushes and some paint and this is what they make – 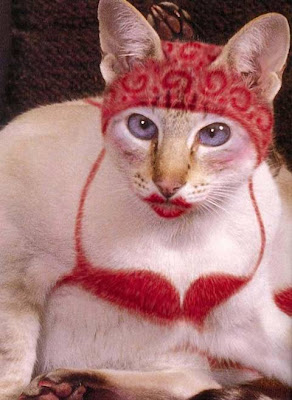 embarrassed cat, hiding from his friends, in a tree and praying for rain: 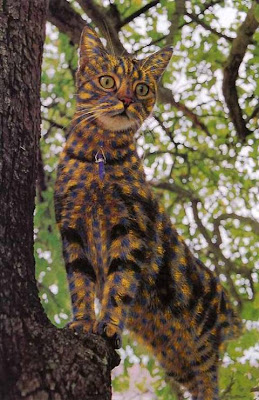 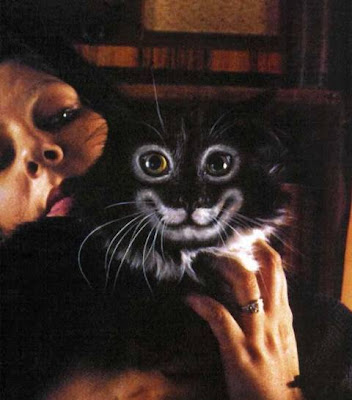 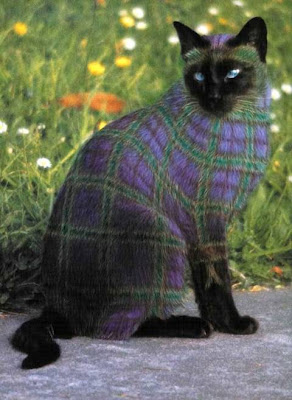 or rather, matchy matchy cat:

i wonder if that cat’s wearing anything under his kilt? 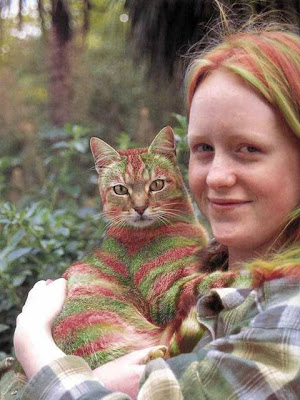 lady – on any planet, in any universe, in any language, in any culture, that’s just not cool. in fact it’s a little bit creepy. if your cat wanted a bad hairdo it would have come back reincarnated as, well, as you. 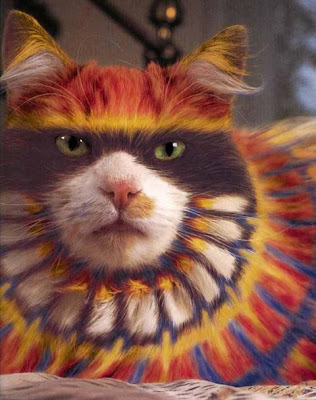 turning a perfectly good house cat into an acid flashback cat. i don’t like it but i must admit, it’s pretty amazing artwork. 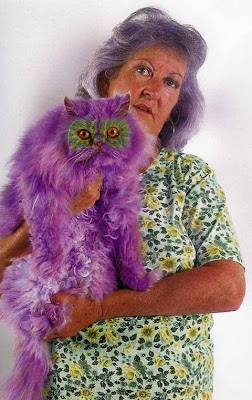 ah yes, now that’s the cat lover we’ve come to recognise and love. the lonely batty old spinster who likes her vodka, has forty two cats and is as mad as a crazy mad thing on a whoppingly insane day. 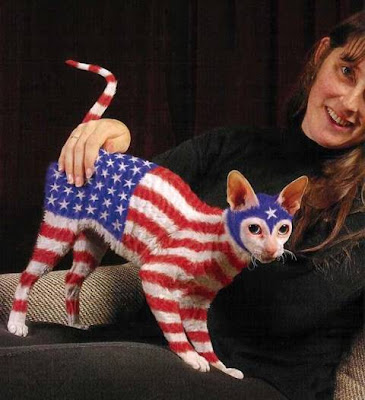 even without the paint job this is one crazy looking cat. seriously lady that’s just cruel. the other neighbourhood cats are going to beat the living crap out of him. how will his patriotism help him then? also surely he’s siamese, not american? 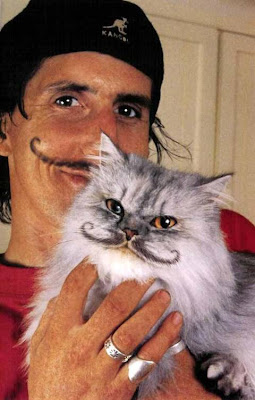 ah monseiur, the old matching tache routine. chicks dig it. throw in the added french insinuation and you’ll have all the pussy you ever wanted. 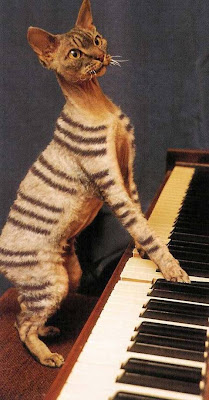 meet the elton john of cats. ie: incredibly gay, but a great pianist! 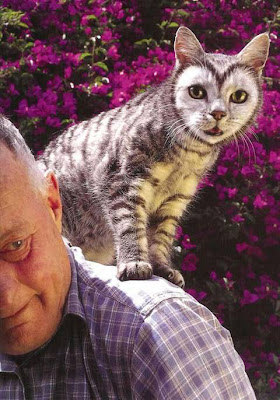 ah, owl cat. he’s way smarter than other cats in the neighbourhood. unlike his owner. 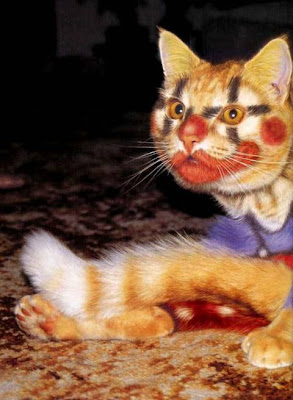 did you ever see mimi in that tv show – the drew carey show? say no more. 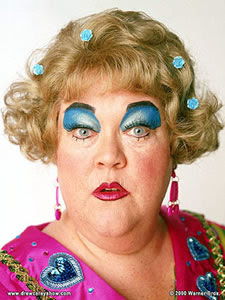 that’s who these few remind me of. 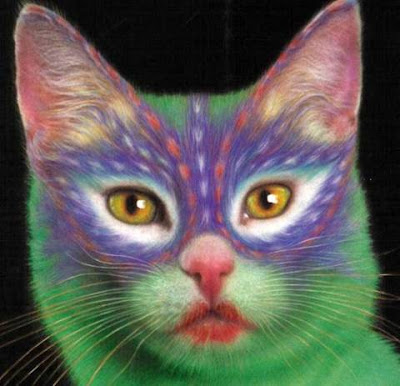 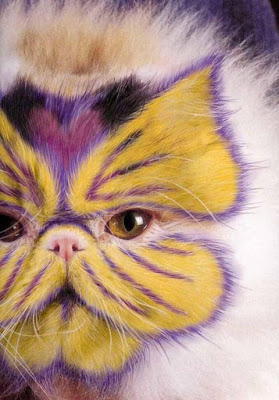 this next one is my personal favourite; halloween cat.
the dog is so going to crap himself when he sees this: 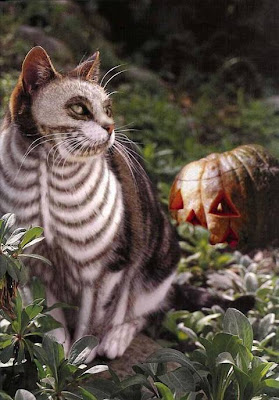 will someone please start having sex with this guy so that he stops torturing his cat. 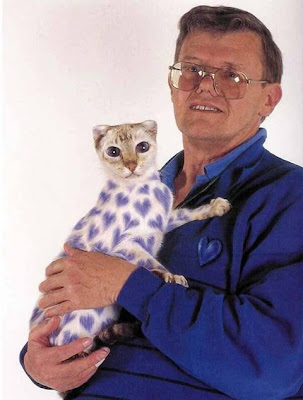 oh no wait, sorry, i only just got a good look at him. nobody should have to do that. 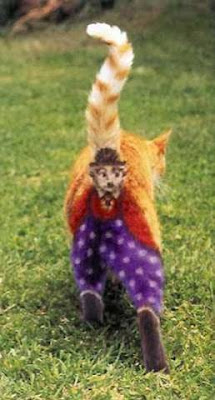 what did charlie chaplain ever do to deserve being that cat’s asshole? 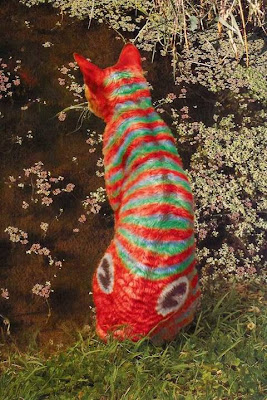 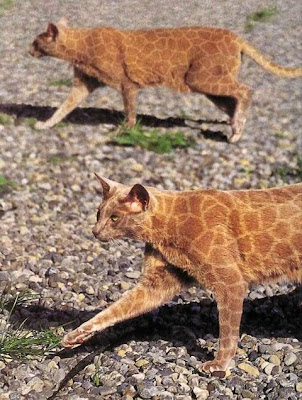 i actually wouldn’t mind owning this next cat – i know, it goes against everything i believe to be normal, but still it looks kind of funky: 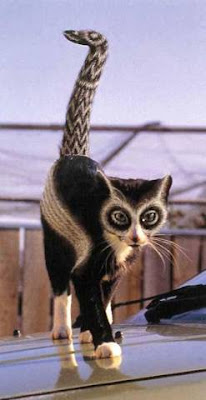 oh fuck, they’re sucking me in with their crazy hypnotic cat painting ways! quick somebody punch me in the face. 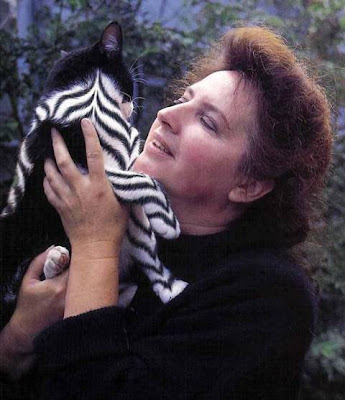 hey crazy cat lady, get a fricken life. your cat does not now, nor will it ever want to tongue kiss you. it’s a cat, you’re a human. deal with it.

and the book that started it all. 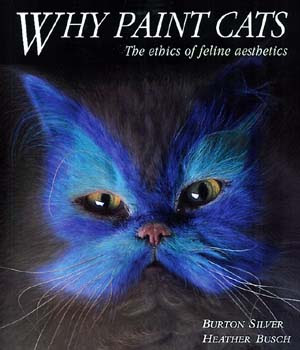 he he he the ethics of feline aesthetics.
should rather be called ‘the madness of crazy lunatic cat lovers’.

14 responses to “people who paint cats.”