Online dating used to be a minefield for curvy girls

This column first appeared in Sunday Times on 22nd October 2017.

There was this guy, back in 2014, who broke my heart. Of course he wasn’t the only one, I’d reached double figures by 2015. Dude was hotter than me and nobody was more surprised when it developed into something lovely, before transitioning into him lying, deviated into ‘it’s complicated’, and then was finally overs.

I wasn’t even sure how we made it past the first date. I had done all the things you did when you were traditionally built and dating online, before the body positive movement thankfully started kicking in a couple of years ago. There were fat girl tricks and I knew them all. Head and shoulders profile pictures only, with rare full-body ones, always taken in careful lighting from considered angles, even better, black and white. We all want to capture our best side. Except for people who take their dating profile pics in the bathroom, I’ve never understood those.

But it wasn’t total deception, what’s the point in catfishing, especially if you’re going to meet the bloke down the line. So I always put that I was ‘a few extra pounds’ in the ‘body type’ section. An understatement at the time, maybe, but online personal ads are like property ads, everyone knows what ‘renovators dream’, ‘charming’, or ‘quaint’ really means.

I was just an insecure girl standing in front of a surprisingly hot guy, asking him to like me, so even though I knew I was out of my league and he was a tonsil, when he ended it I did that thing where you embarrassingly try to argue the person out of it, instead of exiting gracefully. Which was ridiculous, because in the whole of history, nobody has ever successfully argued someone into getting back together with them.

It was while I was asking him why, and what happened, and how come, that he told me I was fat. Like it was some kind of revelation. He wasn’t wrong, and for a change he wasn’t lying, he was just mean and tactless and weirdly only waking up to the fact three months later.

I’ve never figured out why he carried on seeing me for that long if my size bothered him. It’s not like he was blind the first time we met. It’s wanking that makes you blind, not being a wanker. And weight isn’t a personality flaw that slowly reveals itself after time, like racism or loud chewing. Why select a croissant, take it home and eat a large portion of it, and then take it back to the shop dissatisfied, because you really wanted a breadstick?

Online dating was a minefield for the traditionally built. You could lie outright, or smudge the truth a bit, to give someone the chance to get to know you first, and decide for themselves whether they’re okay with a little extra padding. Or you could go in headfirst and write ‘Attention all shoppers, I am overweight’ in the first line of your profile. But that seems a bad way to start a potential relationship. Every day I try to like my body, and I’d like to find somebody else who does too.

WooPlus is a British online dating site that specializes in big beautiful women, and big handsome men, and their admirers. I get what they’re doing, but I can’t bring myself to believe dating apps like this are the solution. I feel like I’d just be someone’s fetish, or marginalized, and that’s not what I’m looking for either.

Fortunately, fast forward a few years and something remarkable is happening in the world. In the latest season of Project Runway (an American reality show competition about fashion design), for the first time in the show’s history, the designers are working with body positive models of all sizes. It’s only taken them 13 years, 16 seasons and 229 episodes to get there.

Mainstream fashion houses locally and internationally are also starting to openly design for real women of all ages and sizes, and even better, use them in their brochures and ad campaigns. And something utterly mad is happening, I’m starting to think that they’re beautiful, and I hope I’m not the only one. It’s not the magic of professional lighting or that larger bodies have changed, I think it’s just that we’re getting more and more used to seeing them; clothed, in underwear and nude. Creases, rolls, back fat, cellulite and all. I’ve always liked a bulkier guy, but now I think I like a bulkier girl too.

Plus, I’ve made an important decision; if ever a guy tells me I’m fat again, it won’t feel like the elephant in the room, next time, I’ve decided I’m going to take it as a compliment. 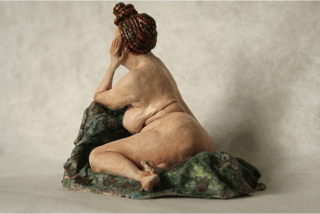