Ahhh can you smell that bite in the air? Yes, that’s because it’s intern season.
Here’s yesterday’s Sunday Times column. Happy reading and happy mondaying.
A MILLION MILES FROM NORMAL – By Paige Nick
THINGS YOU DIDN’T KNOW YOU DIDN’T KNOW
It’s Intern Season at the office right now. It comes around a couple of times a year during the holidays, when kids who are studying need to get a little real-life work experience. It’s so they can decide if what their parents have been vomiting blood, haemorrhaging cash and selling organs to pay for them to study for the last couple of years, is really what they want to do with their lives.
I don’t want to ruin the party here or anything, but surely they should consider embarking on this exercise before the R20 000 term begins?
Although every now and then we do get the odd high school creature visiting too. When I hear we’re getting one of these I have to remind myself that not being a parent myself, it’s a great opportunity to get some insight into the minds of today’s youth. Although we’re only half way through Intern Season now, and I can tell you, you really don’t want to see too far into the mind of a fifteen year old.
It’s on these two or three occasions each year that I’m reminded how old I’m getting. It’s the only way to explain why after week one I find myself shaking my head and saying things like; ‘Sheesh, kids of today, am I right?’ to anyone else over thirty who will listen.
I was concerned that the one had a strange growth on his hand, until I realised it was just his cell phone. I didn’t see him without it once. I’m sure if we’d asked him to knit something he would have done so while texting. Not that knitting is something we do all that much of at my place of work, but you get my point.
When I asked him who he was chatting to so furiously, he said his friend was doing work experience at etv, and that he’d said it was awesome and kiff and rad, and he was learning so much, and he even got to meet The Baby Boks. I had to restrain myself from asking how his friend managed to do all that when he was so busy texting all the time. But somehow I managed to curb my inner granny.
But by far the most fascinating thing I’ve discovered about the teenager is their incredible built-in assuredness. When you’re young there’s nothing you don’t know and cannot claim with great authority. You just know so much more when you’re a teenager. Way more than when you’re an adult.
When we lightly teased the boy-intern about one of the pretty girl-interns, he informed us that he wasn’t interested as he was already in a serious long-term relationship. When we asked how long they’d been together he told us with the confidence of a fiancé, that it had been three days. I suppose that’s practically a lifetime in teenage years.
I can’t help feeling a little jealous, not for the zits or the exams, but for all that knowledge, even if it is only mostly imagined.
About a million years ago I came across a book called ‘Things you didn’t know you didn’t know’. I stood in the shop and stared at the cover for a while, doing the mental gymnastics required to figure out what the title meant, and then I bought it. I reckoned one could never know too much.
But somewhere between then and now I loaned it to a person who never returned it. I wish I could remember who. (Yet another thing I’m now reminded that I don’t know.) I’d look in the book for the answer if I still had it. Perhaps it will be in the sequel, ‘More Things You Didn’t Know You Didn’t Know’.
It’s shame I lost that book, because I’ve since discovered that I actually know less now than I ever have.
For example, until recently, I didn’t know that the little bit of weird, wobbly, wrinkled skin on your elbow is called your ‘wenis’. My friend Edyth told me that. See, now you know too.
And until today, I also didn’t know that there’s a urinal somewhere in Sao Paolothat’s actually an electric guitar. When you pee into it, your pee hits a series of sensors mounted onto the guitar strings, which produce different notes based on the power and direction of your spray. The notes then resonate through wall mounted speakers, creating your very own pee solo. And when you’re done (after you’ve washed your hands, please) you can download an MPEE3 (yes, that’s what they call it) so you can play your pee back to your friends. 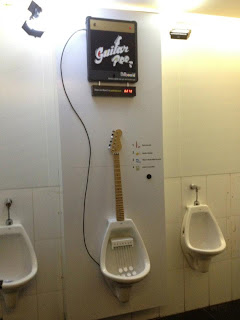