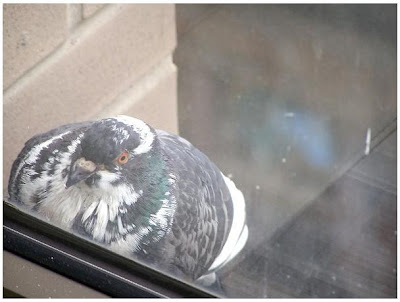 For the last week he’s been hanging outside my office window.
I’ve been watching him. Gerald is madly, deeply, passionately in love, and so he’s spent the entire week cooing, and cocking his head and acting spacey. Love will do that to a chap.
Not rain, nor sleet, nor snow has put him off his quest. (Okay okay, it doesn’t snow here, i’m just using that for poetic effect.)
Who is he in love with? You may ask, if you have very little life and no friends and therefore take an interest in the life of a pigeon, as I have this week.
Well, it took me a while to figure it out, but I get it now, basically for the last five days solid he’s been looking at his own reflection in the one way glass window. And let me tell you, he really likes what he sees. Gerald has gone and fallen madly, deeply, truly, passionately in love with himself.
I feel kind of bad for him, Gerald’s going to be so disappointed when he realises that there are no other birds hanging out at that window, other than himself. It must be hard being in love with yourself as a pigeon. I’m not sure that pigeons have the ability to you know, to please themselves, being that they don’t have hands or opposable thumbs. I mean when a human is in love with him or herself, it’s not such a train smash, but how can it have a happy ending when you’re a pigeon?
I also worry that he’s spending so much time wooing himself, when he really should be getting out there, meeting other birds.
Every now and then i tap on the window to try jolt him out of his passionate gaze, but he is
steadfast in his absolute desire for himself. Poor Gerald.
He did get me thinking though… 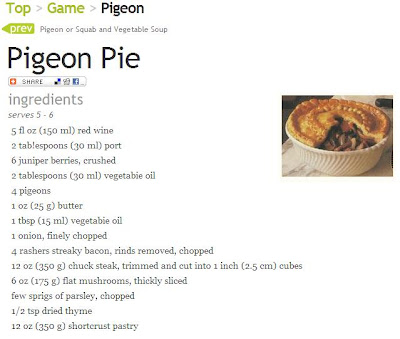 I wonder what pigeon tastes like?
And would I eat it? Would you?