mc escher is not a rapper.

someone somwhere found this image online.
could i be anymore vague about it’s origins? probably not.
anyway, it’s gotten me all turned around and inside out and confused. i had to look at it a lot and think about it. and now my head hurts and i need to drink a whiskey. 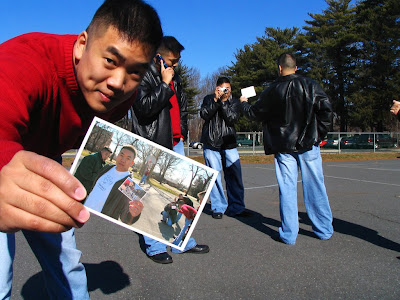 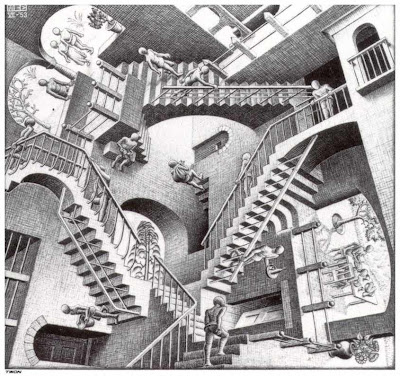 does your head hurt now too? sorry about that. my fault.
but back to the guys in the red jumpers and leather jackets. these six chaps (it took me an embarrassingly long time to figure out how many of them were actually there – yup, lower grade maths i’m afraid.) as i was saying, these six chaps (brothers? sextuplets? ha ha the word sextuplets is funny when you think about it!) {sheesh i keep getting sidetracked} these six chaps must have an awful lot of time on their hands. what’s the bet when trying to figure this out they even drew a flowchart diagrammy thing. nerds. i would have had to.
a part of me wants to say – boys, what’s the point? go get a job!
but another part wants to gather some people who look like me and try make my own one.
then again, meh! who’s got the time?
no wait, where’s the guy on the phone in the picture, is he the guy who’s been cropped out? i’m confused again. and there’s a guy playing basket ball in the picture i didn’t count him in, so there are actually seven of them, right? (seventuplets?)
any ideas how they did this?
and more importantly any ideas why they did this?

5 responses to “mc escher is not a rapper.”