Map of the world's penis sizes

I first saw this on someone’s blog. But now I’ve lost track. Kaloo, was it you? Nik the Greek, was it you? Remind me and I’ll be sure to credit you.
Anyway, then I went to Google and tried to find out as much as I could about it.
Suffice it to say there’s not much to tell other than the fact that someone has made a world map that shows how penis sizes vary around the world.
I’ll be fucked if I know how they did this. I can only imagine a large group of researchers with strong stomachs and lots of rulers.
Here’s the key to the map: 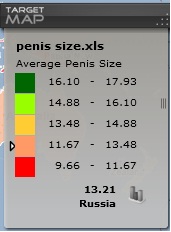 Average Penis size: 17.93! Since when is that an average penis size? That sounds kind of above average to me.

and the smallest is around 10cm, shame man.

So some questions and observations;
Is that erect or flaccid, do you think? I’m guessing erect. Cos imagine what happens to a 17.93cm flaccid penis when it become erect? That would surely be a danger to low-flying aircraft.

What do you think China and India ever did to deserve what they got?

Am happy to see that Africa is well in the green, good job Africa. I guess a continent’s got to be good at something, right?

you can check out the map and some info here if you’d like.

Previous post
Who gets laid more, ugly guys or ugly girls?
Next post
And now for a map of the world's boob sizes

8 responses to “Map of the world's penis sizes”