Hi, hi, hi all.
Happy Monday (If there is such a thing as a happy monday).
Here’s yesterday’s column, should you have the urge to settle down with a cup of tea or a coup of tea (if you’re Libyan).
Enjoy. x

I don’t really get the moustache. In my mind the full bushy is only really appropriate in a handful of situations. On Tom Selleck, always. On a forty five year old sheep farmer deep in the Karoo, sometimes. On a detective in the Brixton Murder and Robbery Squad, usually. And on all men in November, annually.
You see, in two days’ time, the first of November marks the beginning of Moustache Season. Movember, for those of you who’ve never heard of it, is an annual month-long event, which was invented by a bunch of Ozzie dudes in a pub in Adelaide in 1999, and which has snowballed into a Mo-phenomenon that raises funds and awareness for various men’s health issues. Talk is it’s raised somewhere in the region of R1.3 million for the SA Cancer Association. Not half bad for a bunch of Mo-fo’s.
If you plan on getting your Mo on here are some of the basic rules of Movember:
Rule One: on Shadowe’en (31st October) the entire moustache region (which comprises the upper lip and handlebar zones) must be completely clean shaven.

Other than that, the kind of Mo you choose to groom is entirely up to you, and there are a lot to choose from. The pencil thin, the handlebar, the trucker, the rock star, the scrubby (for those of you who struggle to grow anything of substance), the Groucho Marx, or the paedophile, to name just a few.
Sorry for you wives, girlfriends and boyfriends of men who partake in Movember. It’s no fun enduring the stares, the mo burn and witnessing the food storage that is unavoidable with any full moustache. But it’s all for a good cause, and it only lasts a month. Well let’s hope it only lasts a month.
Some time ago I came across this guy on the dating website that I frequent. We chatted, emailed, swapped photos and then met, as you do. It turns out that between taking the photos that he’d emailed me, and meeting me in the flesh, he’d somehow managed to grow a level ten, defcon 4 moustache. Think Magnum meets a broom.
I checked my diary, just in case I’d forgotten to take my pills for a couple of months and it was suddenly Movember, but it wasn’t, we were still in August. I wondered if maybe he was doing a practice run to strengthen his follicles, or perhaps he’d lost a bet or something. Nothing about his looks or his demographic made him an appropriate candidate for a moustache, and I wondered why none of his friends or family cared enough to tell him how ridiculous it looked.
Hey, perhaps he was being ironic and retro cool, and I just wasn’t funky enough to ‘get it’. A goatee I could understand, that’s the moustache’s cooler second cousin. And a beard hints at a myriad of other personality traits. But this moustache on him just didn’t make any sense.
Either way I couldn’t bring myself to kiss him, I just wouldn’t know where to aim. And we certainly wouldn’t make it very far in a relationship because I would never be able to talk about anything else.
For example we might be out at a restaurant on our eleventh date, and the conversation might go something like this:
TACHE: So, what’s looking good to you on the menu?
ME: What did you do to lose the bet? Really, you can tell me.
TACHE: Oh for f***’s sake, not this again!
See, it wouldn’t work for either of us.
I guess we should be grateful that for most of the population moustaches are only compulsory for one month every year. Things could be worse, there could be a Hairtober, Movember and Tachecember. So bring on Movember, all thirty hairy days of it. 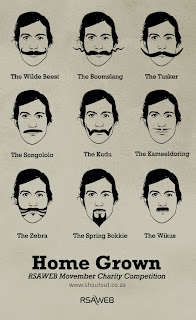