I have a weird name. There’s no denying it.
Paige Nick
Alright so Paige isn’t SO strange on its own, but when you pair it with my surname, that’s when the confusion sets in.
My mum tells a number of different stories of how I came to be called Paige, depending on what mood she’s in when you ask her.
99.9999999% of folk usually assume I’m actually Nick Paige. As Nick is a far more likely first name.
Most will tell me I’ve gotten it wrong and try to correct it. For some reason they think i’m such a ginormous idiot, that even after having had my name for the last thirty-something years, they think I still haven’t quite got the hang of it and manage to get it wrong.
So they kindly swap it around for me. Which usually results in problems at the bank/post office/home affairs and boarding gate.
Which is why the following news story gave me a bit of a fright.
In a terrible, awful, shocking, tragic accident, a person named Nick Paige has been killed on a beach in Madagascar after a cliff collapsed. 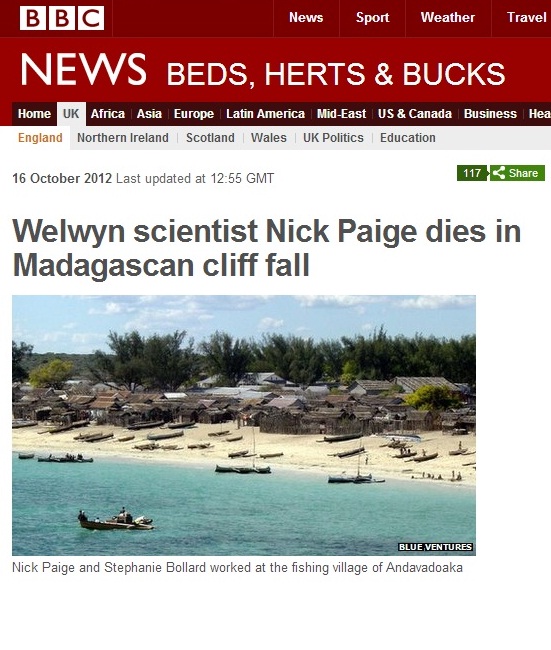 I double checked, it wasn’t me. I’m still sitting here in this chair.
He was a 24 year old marine biologist from Hertfordshire.
They say it was a freak accident. Tell me about it!
My condolences go out to his family and friends through what must be a terrible time.
You see, there the news goes again, you really couldn’t make it up.

(In other bizarre nominative determinism news, and i know this terrible accident is no laughing matter, but the MD of the company of marine biologists (who conserve threatened marine environments) that Nick Paige worked for, is named Richard Nimmo.)