how young is too young?

forget jesus, what would you do?

i got this message in my online dating website inbox a couple days ago: 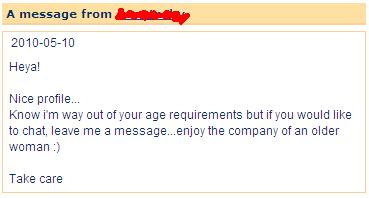 he’s twenty four for fuck’s sake!
just to put things in perspective for those of you who don’t know me, i’m 36. (wow writing it down like that i feel older than i thought!)
i’m thinking the sex with a 24 year old would probably be energetic, but ultimately unfulfilling. an anti-climax if you will. after all, in my experience, a little bit of experience in the bedroom goes a long way.
also i just don’t think i could do it with a straight face. that and i’d keep expecting the police to burst in (and not those sexy stripper police with the velcro pants. i’m talking real police here) surely sleeping with someone so much younger than oneself is against the law or something?
but it does get me thinking about what my cut off would be. maybe thirty at a push. don’t think i could go ever younger than thirty, and even then thirty would be a stretch. and i certainly wouldn’t want to be in a serious relationship with someone that much younger than me.
i don’t know, is there a rule about this kind of thing? how low would you go?
(Demi Moore need not respond.)

7 responses to “how young is too young?”