Happy Monday. Except for everyone who went to the Loeries Awards this weekend. Then it’s a not so happy monday with a monster-sized hangover. Shhhhh…. okay, I’ll whisper this column:

A MILLION MILES FROM NORMAL – By Paige Nick
HOW MANY FINGERS AM I HOLDING UP?

The other day I came across an article in the newspaper about a thirty seven year old Cuban man who was born with twelve fingers and twelve toes. His name is Yoandri Hernandez Garrido, although his friends call him 24, for short.

I saw a few pictures; it’s all very neat and tidy. They’re perfectly formed, so you wouldn’t notice anything different at a quick glance, but when you look a little closer, there they are – six fingers on each hand, and six toes on each foot. 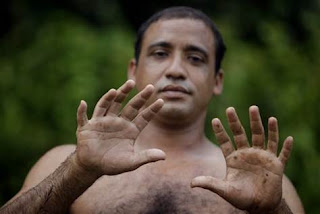 Do you think he does more around the house than the average guy? I’d love to ask his girlfriend. He certainly wouldn’t have any excuse not to take out the rubbish, change a light bulb, or fix the dripping tap, it’s not like he’s got his hands full.
After being grossed out initially, I’m a little intrigued. I mean I already type pretty fast, but with an extra two fingers I’d be unstoppable! My latest novel, This Way up, has 335 pages, but with an extra two fingers I could have easily hit 400 pages. And I’m not much of a piano player now, but with two more fingers, can you imagine?

I wonder if this is all part of our natural evolution? It would probably be arrogant for us to assume that we simply went from amoebas to monkeys to our current human form and then stopped evolving. We’re not that perfect as we are, are we?

I did read somewhere that we are already developing stronger, bigger, more flexible thumbs and fingers from all the texting and Play Station playing that we do as a species. So maybe this is just another one of the tiny little ways our bodies are changing to help us cope better with our lifestyle.

I know most days I could certainly do with an extra arm, as well as the brain capacity to do more than one thing at a time. Just think, while typing this column (super fast with my additional fingers) I could have filled in my tax return with my third hand.

Who knows, maybe fifty or a hundred years from now, six fingers on each hand and six toes on each foot will be the norm, and people with only twenty digits will be so last century, and really crap at Guitar Hero.

I checked out Wikipedia (where else?) and unlike Polydactylism (when you have extra digits) which is currently quite rare, it turns out that having three nipples is pretty common. In fact Dr Wikipedia says they are diagnosed in one in eighteen men. Damn! I know eighteen men, I wonder which one of them has a third nipple?

For the ladies with three nipples (1 in 50) it must take the load off the other two when it comes to breast feeding, and it does provide more choices when it comes to piercing, so it could very well be part of the master plan of evolution.

If I could put in any other evolutionary special requests, I’d vote to evolve a slightly thicker skin. And an extra pair of eyes in the back of my head would come in handy too (although I’ve heard those grow naturally when you become a mother). Hey, I’m all for evolution, especially if it makes life a little easier, why not? I give it three thumbs up.

9 thoughts on “How many fingers am I holding up?”