Guess who's coming for dinner?

Morning all, yup it’s monday again.
Here’s yesterday’s column. It’s not for the weak of heart or stomach. Consider yourself duly warned. 🙂

A MILLION MILES FROM NORMAL -By Paige Nick
GUESS WHO’S COMING FOR DINNER?

When we were cavemen things were much simpler when it came to food. If you could catch it and kill it, before it caught and killed you, then you could eat it. Either raw, or if you’d managed to evolve a little by that stage and had already figured out how to make fire, then you could shove a stick up its butt and cook it over an open flame.
Or if you were the kind of caveperson who couldn’t run that fast and therefore had to rely on more lethargic types of food, then you picked a berry off the nearest bush and ate that. If you didn’t die of food poisoning within eight hours, you were good to go. Like I said, food was simpler back then.
Fast forward a couple hundred centuries and we’ve pretty much worked our way through what’s naturally available out there, we’ve also tried all the stuff that seems like it might go well together, and so now we’ve had to move on to slightly more experimental stuff. We’ll pretty much try anything. For example, I just saw an ad for a pizza that has a sausage rolled up inside its crust. 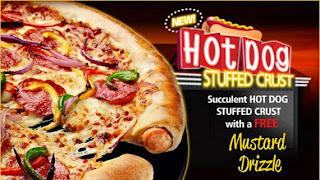 I imagine this is food specially designed for commitment-phobes, or people who struggle to decide what to order. Should I get the pizza or the sausage? Sausage or pizza? Ah what the hell, why don’t you just shove the one inside the other and I’ll have both.

And that’s by no means the worst thing we’ve done to pizza. In Scotland they like to deep fry it. Because pizza isn’t bad enough for you on its own, we need to dunk it in boiling oil to make it a real culinary heart stopper.
But this shouldn’t come as any great surprise, deep frying is big in Scotland. They do it to chocolate too. They take a Mars Bar, roll it in batter, drop it into the deep fryer and then serve. With or without French fries (with fries it’s called a ‘Supper Meal’.God help us all.) I’ve never tried one, but they say it’s a culinary delight. We do that a lot these days, find something truly disgusting, then serve it up and call it a culinary delight.
We should be worried; it’s no longer just pregnant women cruising around eating things in weird combinations. A guy I work with eats peanut butter and banana on toast. It’s called an Elvis Sandwich because the King himself was partial to it. I’ve also heard of bacon flavoured ice-cream, and for a while there was a recipe for a beetroot chocolate cake doing the rounds, what’s next, cauliflower cupcakes?
Not far off, I saw an article in the newspaper last week about an insect cookbook that was just launched in Holland, containing such culinary delights (there’s that term again) as Grasshopper Pie, worm-filled chocolate muffins, and insect cupcakes. When did bugs suddenly come back on the menu?
I checked it out, and I’m afraid to say that apparently in the next 5 to 10 years we’re going to be eating a lot more insects. After all there are 40 tons of insects for every human being on the planet, they’re a high source of protein, and they emit way less noxious gasses than the cow, so it does make sense.
Except I do worry that every meal is going to start feeling a little like an episode of some survival show on the Discovery Channel.
You have to wonder who was first to eat stuff like a worm cupcake, and more importantly how they convinced anyone else to try it? If my mate came at me with a grilled scorpion on a satay stick, I’m not sure we’d be mates for that much longer.
But all of this pales in comparison to something else I found online. It’s a recipe book called Natural Harvest; A collection of semen-based recipes. This is real people; you could not make this up. Never will I look down my nose at ketchup crazies again. When it comes to disgusting, this beats tomato sauce on eggs hands down.
I’m not sure what’s more horrifying here, the fact that there’s a recipe for a ‘pungent aioli’ sauce containing semen on page 41, or the fact that there are more than 41 pages worth of semen recipes in this book. I know chefs always bash on about the importance of using fresh ingredients, but this is ridiculous.
Semen smoothie, anyone? They say it’s high in protein. Or for desert, how about ‘Tiramisu Surprise’. It’s ingredients are a bigger surprise than your guests could ever imagine! I never thought I’d say it, but it makes the thought of eating the odd locust way easier to swallow.

3 responses to “Guess who's coming for dinner?”