below is a pretty average profile that one might come across if one was a 30 something chick living in cape town looking for a match.

it all seems perfectly normal… until. 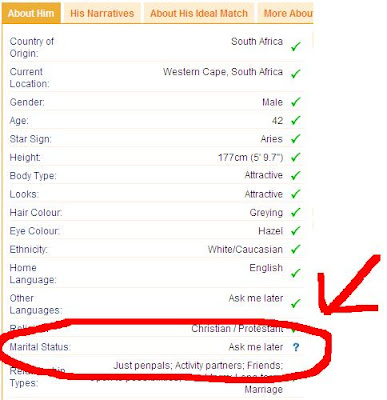 what does ‘ask me later’ mean?

it’s not an essay question!

surely you’re either single, married, divorced, separated, engaged, in a relationship or widowed?

does he not know his marital status? did he forget it while he was driving to work this morning?

i emailed him and asked what ‘ask me later’ means. but i didn’t get a response. so i guess when he said ‘ask me later’ he actually meant ‘ask me much much much later, like after we’ve shagged’. nice try buddy.

3 thoughts on “freaks and lunatics”