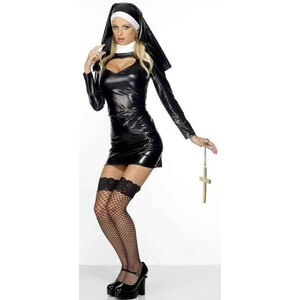 THE CHURCH OF STRIP – By Paige Nick

After last week’s column, which came to you from the strip clubs and prostitute windows of Amsterdam, this week I’m in the strip malls and airport windows of America.

I’m currently stuck in a delay at an airport, half way between there and nowhere. Hundreds of people are clustered around the food outlets and plug outlets. Both in equally high demand. Across from me in the boarding gate waiting area, a woman is reading out loud from the bible to three other people. I’m tempted to lean over and tell them spoiler alert, I’ve read that book, it doesn’t end well.

I get religion. I get why it’s important to some people, and not so important to others. But what I don’t get is how? There isn’t an ounce of proof that any of our gods exist. It all feels like such a huge leap of faith, such an enormous mass suspension of disbelief.

Women roam in lingerie, trying to drum up either a lap dance (around fifty Euros) or a private dance (around eighty Euros). Both of which lasts three or four minutes (the one behind a curtain, the other in full view of the rest of the club). The dances are pretty standard, the stripper seats her customer, then gyrates, swivels, flexes, jiggles, turns, twists and wiggles her increasingly more naked body in his (or sometimes her) face. Most even let the customer help her take off her knickers. Fifteen to twenty bouncers lurk inconspicuously around a small to medium club so the guy can have a feel, as long as nothing gets out of hand.

I was blown away by the utter, almost religious suspension of disbelief these men seem capable of. Do they really believe these women like them and want to be there, doing this, or maybe that doesn’t even matter?

Sure strippers are great actresses, but there’s no smoke and mirrors here, it’s not a magic trick, and none of it’s a secret. From the dancer’s pretend names to their fake boobs, it’s all business baby. But human beings have a remarkable way of not thinking about awkward truths. That’s why we can sleep in hotel beds, shake hands (even though we don’t know where they’ve been), believe in religion, eat processed food, and why a man approached by a woman in a bra and g-string, can accept that for those five minutes she really likes him. That when she takes off her clothes and smooshes her boobs in his face, then twerks in his crotch like her butt’s on fire, it’s because he has charm, enigma and sex appeal, and not just because he has fifty euros.

I watched a twenty-something guy chatting up a stripper at the bar, with love in his eyes. Temporary, but visible. I could tell from his body language he was using all his best moves. He cracked a few jokes and even did an impression. I wanted to nudge him and say he didn’t have to expend all of that energy. He should save that for a civilian chick, she was his as long as he wanted her, or as long as he could afford her.

Why all the pretense? Because disbelief has been appropriately suspended. For the guy to get maximum enjoyment from the encounter, that’s just the way it has to be.

For some men these women are gods, and they go to pray to them night after night. And much like a dollar evangelist, the women will take every cent on offer, in exchange for enough comfort and happiness to ensure he comes back and does it all again next Sunday.