More in the category of ‘you couldn’t make this shit up if you tried’, I stumbled across a weird election poster for a political party called The PA: 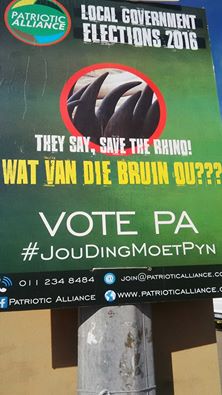 Huh?
I’ve written a lot of pay-off lines in my time, but#JouDingMoetPyn wins.

Forgive my ignorance, but who? what?

So I went to Google:

There’s so much here, I don’t know where to start.

I love that he’s only a ‘one-time convicted bank robber.’ Phew, as long as he wasn’t caught more than once.

A one-time convicted bank robber and a former convicted fraudster run for president, what could go wrong?

Only in South Africa.