did you know that Ambrose Bierces‘ middle name was Gwinnett?

his parents must have been complete assholes. who does that to a child? i mean it’s no ‘Adolf Hitler’ but still it’s not great, is it?

for those of you who have been off doing tik out of a broken light bulb in a back alley in woodstock for the last year, Ambrose Bierce is a regular feature here at A Million Miles from Normal.

a) because i love him and i want to have his 19th century babies.
b) because he’s kind of sexy in a vintage, check out my handlebar moustache kind of way.
c) he wrote a book called the devil’s dictionary, and that’s one hot title for a book if you ask me.
d) he managed to live to the ripe old age of 72 with the name of ambrose gwinnett bierce, if that had been me i would have been kicked to death by the other children in the playground before i hit 12. 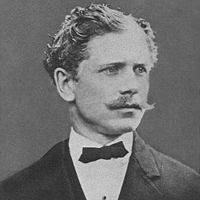 basically Ambrose Gwinnett Bierce was a writer born in 1814. the book he’s best known for is his devil’s dictionary. 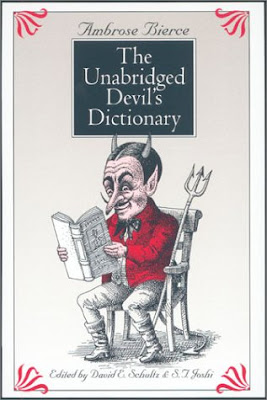 Mad, adj. Affected with a high degree of intellectual independence. it is noteworthy that persons are pronounced mad by officials destitute of evidence that they themselves are sane.

Magic, n. An art of converting superstition into coin.

Maiden, n. A young person of the unfair sex. Being found wherever sought and deplored wherever found.

Male, n. a member of the unconsidered, or negligible sex. (it really says that!) The male of the human race is commonly known (to the female) as Mere Man. The genus has two varieties: good providers and bad providers.
Marriage, n. The state or condition of a community consisting of a master, a mistress and two slaves, making in all, two.
Martyr, n. One who moves along the line of least reluctance to a desired death.
Mayonnaise, n. One of the sauces which serve the French in place of a state religion.
Mind, n. Mysterious form of matter secreted by the brain.
Mine, adj. Belonging to me, if I can hold or seize it.
Monday, n. In Christian countries, the day after the baseball game.
Mouse, n. An animal which strews it’s path with fainting women.
Mouth, n. In man, the gateway to the soul; in woman, the outlet of the heart.
and so endeth the ‘M’s’.
thanks ambrose, i love you, call me any time, i’ll be waiting. oh you’re dead so you can’t call. shit. oh well, got any great great great great great great great great great great great great great great grandsons?