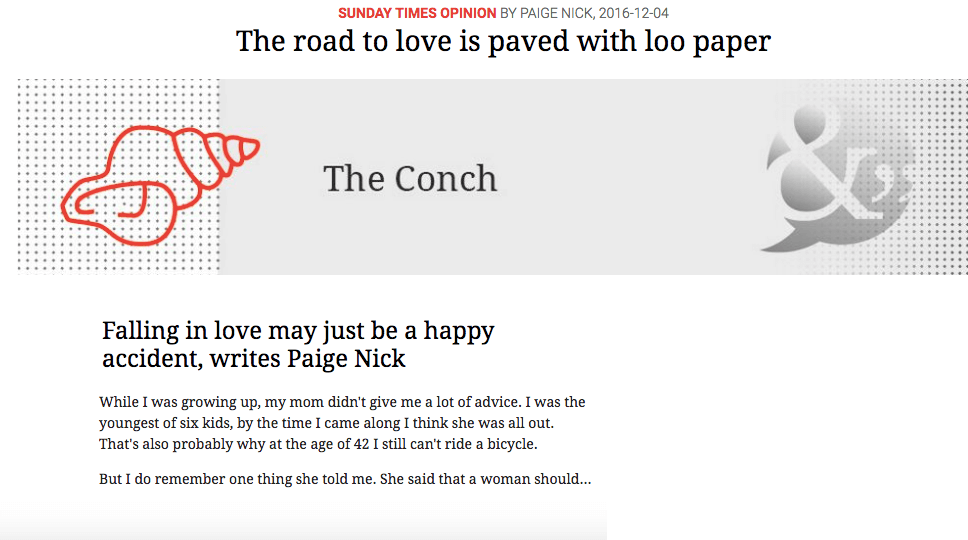 This column first appeared in The Sunday Times on 4th Dec 2016.

The road to love is paved with loo paper

Growing up, my mom didn’t give me a lot of advice. I was the youngest of six kids, by the time I came along I think she was all out.

That’s also probably why at the age of forty-two, I still can’t ride a bicycle.

But I do remember one thing she told me. She said that a woman should always try to find a man who loves her more than she loves him.

Thanks mom, easier said than done.

The finding a man part is easy, it’s the rest of it that’s a bit of a ball ache.

Sure, I get the theory. If a guy is super in love with you, he’ll never cheat, treat you well, not mind you in a pair of holey tracksuit bottoms, think it’s cute when you eat all the chocolate in the universe, and all those good things.

But do you really want to be the person in a relationship who’s not fully in it? Surely it’s better to be all-in and vulnerable, experiencing love from 360 degrees, rather than hanging out on the edges, partially, mostly, pretty much, sort of fully into it, but here and there also quite unsure about it?

And when the scales of love aren’t balanced, does the other person know they’re more into it than you are, can they sense it? Or maybe it doesn’t matter to them, because if they like you that much, they’ll take 87% of you and be grateful for it.

But the non-sitcom, real-life truth of it, is that in any relationship there’s always one person who’s more in love than the other. Because not every relationship is experienced as an intense, all-you-can-eat love-buffet.

Some start out with a first date, where you’re not entirely sold, but you sleep with the person anyway, cos you went to the trouble of both swiping right, then Whatsapping and making a big effort to come across as smart and funny for a few weeks, then shaving your legs and other and forfeiting binge-watching The Real Housewives of New York City for the night, so you may as well get some leg over. And anyway you’re probably never going to see him again, so why not. And the next thing you know, for some reason you’re seeing him again for a movie, and then for dinner, and then and then and then, and then some time later you’re sharing your ten hundredth meal together and laughing at the same stupid jokes.

Somehow, because he liked you enough, he pushed you kicking and screaming over into a place of trust

And then the day comes when you come home to find loo paper and toothpaste has magically appeared just as you’d forgotten that you’d run out, and when the sun sets, there’s a twenty minute unconditional back rub with your name on it, and right then the tables turn, maybe only for a moment, or maybe for ever after, it’s too soon to tell, but you suddenly love him more than he loves you.