Death of a salesman

For those of you who missed it, here’s yesterday’s Sunday Times column, in which I have murder on my mind. If anyone has a good alibi for me, please get in touch.

Please forgive me if I seem a little unfocussed today. I’m in the process of moving and my brain is scrambled as a result.

They say moving house is one of the most stressful things you can do. Apparently it’s right up there with getting divorced, having your in-laws stay with you over Christmas, and being the president of America. Here’s hoping I’ll never be able to tell you if this statement is true or not based on personal experience.

Of course violence is never the answer, but a quick murder on a day like today would certainly solve a lot of problems.

It’s a good thing I’m a writer, because if I was a judge, and a woman of indeterminate age, average height, and below average looks, much like myself, had to stand in front of me in a court of law, and plead guilty to murdering her estate agent, I’m pretty sure at this stage I’d let her off the hook. All murders aren’t that bad are they? Surely every now and then one might do us all a bit of a favour?

I figure if ‘I did it for research for my new novel’, or ‘because he’s an inefficient twat’ doesn’t stand up in court, we could always go with the old PMS defense. I Googled it, it’s actually a thing and historically it’s worked for a couple of people.

There’s twenty nine year old barmaid, Sandie Craddock, for example. She stabbed a co-worker to death, and got off the murder charge, after pleading diminished responsibility due to PMS. Proof that her monthlies turned Craddock ‘into a raging animal’ came in the form of her diaries, which showed that her past thirty convictions all occurred around the same time as her menstrual cycle. Thirty convictions! She doesn’t need progesterone; she needs a maximum-security facility, a tranquiliser and a muzzle.

I really shouldn’t joke, there’s nothing funny about murder, death on the other hand can be pretty hilarious. Not mine of course, that would be sad and tragic, but when it’s someone you don’t know and the circumstances are awkward, well it can be morbidly funny.

When I put out the call on social media for any funny stories about death, an author-friend was quick to respond. It turns out that his friend, Sally’s friend’s, aged English aunt started choking at a dinner table one evening. There were guests round, and she got very embarrassed because she couldn’t stop coughing and choking. So she excused herself from the table and went to the bathroom, to cough and choke politely in peace. She stayed in the bathroom for a while. Until she expired actually. Essentially, one could say she died of embarrassment.

Our late Aunt English reminds me of Lady Grantham of Downton Abbey fame. When a guest to the manor house expired in the middle of the night in season one, she quipped; ‘Last night! But he looked so well. Of course it would happen to a foreigner. No Englishman would dream of dying in someone else’s house.’

Another friend told me I should name and shame the agent who has been causing me such stress, and I was going to, but then I realised, should anything out of the ordinary happen to the poor chap, everyone would know exactly where to turn. And while it’s a nice notion, I’m not sure that ‘the erotica made me do it’ will be able to save me this time. 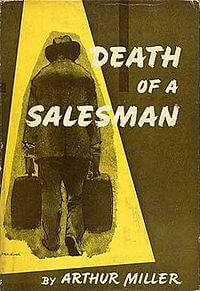 2 responses to “Death of a salesman”