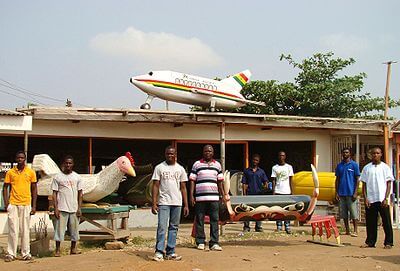 It turns out there’s a lot of life left in death. Back in the olden days, when you died you were dead, people mourned, and that was that. Nowadays there are just so many more options.

Choosing what happens to you when you die has become a little like ordering eggs. How do you want them done? Fried, scrambled, poached, sunny side up, flipped or boiled?
Do you want to be buried, cremated or floated down a river?

There are more than a zillion options for your ashes if you go the cremation route. You can have them scattered, poured into bullets, added to fireworks, turned into diamonds, put into a snow globe, or shot into outer space. You can even have your cremains (cremated remains) turned into a pencil if you want. One dead body produces up to 240 pencils, so you could bequeath one to everyone you know.

If you want to go the burial route, there are also now more options than ever. A company in Ghana were the first to create designer customised coffins in the 1950s, and that’s still big business over there today. They’re called Abebuu Adekai, fantasy coffins, or ‘boxes with proverbs’. For enough money they’ll turn your final resting place into just about anything you desire – you could have a coffin built in the shape of an airplane, a Louis Vuitton handbag, a fish, a pig, an onion or even a guitar, cell phone, or surfboard, if that’s what you’re after for your afterlife.

An author-friend of mine’s hairdresser builds coffins as a hobby, I guess cross stitch and bowling were already taken. They currently only make the simple pine ones with rope handles, but they’re looking to expand soon and branch out into themed funerals.

Say for example you wanted a Wild West themed funeral; they would be more than happy to oblige. Your coffin could take on a cowboy design, and be transported to the funeral on the back of a wagon. And I’m sure the priest would throw on a pair of chaps and a sheriff’s badge, if you asked him nicely enough.

It’s so crazy it might just take off. After all, funerals are supposed to be the celebration of a life, much like a birthday party, and we don’t seem to have any problem theming those. Even weddings seem to have a theme these days, whether it’s intentional or not. You get trailer park weddings, shotgun weddings or meringue weddings.

I certainly don’t think that the party industry would need too much convincing to add it to their repertoire; they’re pretty much up for anything. Have you been into one of those party shops lately? There’s not much in there they don’t have, but be sure to take out a second mortgage before you go. You’re looking at R2,50 for just one balloon and that’s if you don’t want air in it (you’ll be pleased to hear that for your funeral they also come in black), air will inflate the price of the balloon up to R7,50.

I can see it now, first a funeral theme, then maybe a funeral cake, and what about funeral party packs, to thank the mourners for coming. It could contain some tissues, a small snack (some funerals do tend to drag on a bit), a mixed CD of some of the deceased’s favourite tracks, the number of a good proctologist (what better time to remind people that they need to get checked out regularly), and maybe even a couple of brochures from your local life insurance company.

Okay so maybe it feels a little too much like a six year old’s birthday party. This year when I die I want a dinosaur funeral, and next year I want a lazer-quest funeral. I tried to think what kind of theme I’d like for my funeral, but I can’t stop thinking about the possibility of being turned into pencils.

On the upside of death though, I guess we can all just be grateful that human taxidermy isn’t an option. Yet.