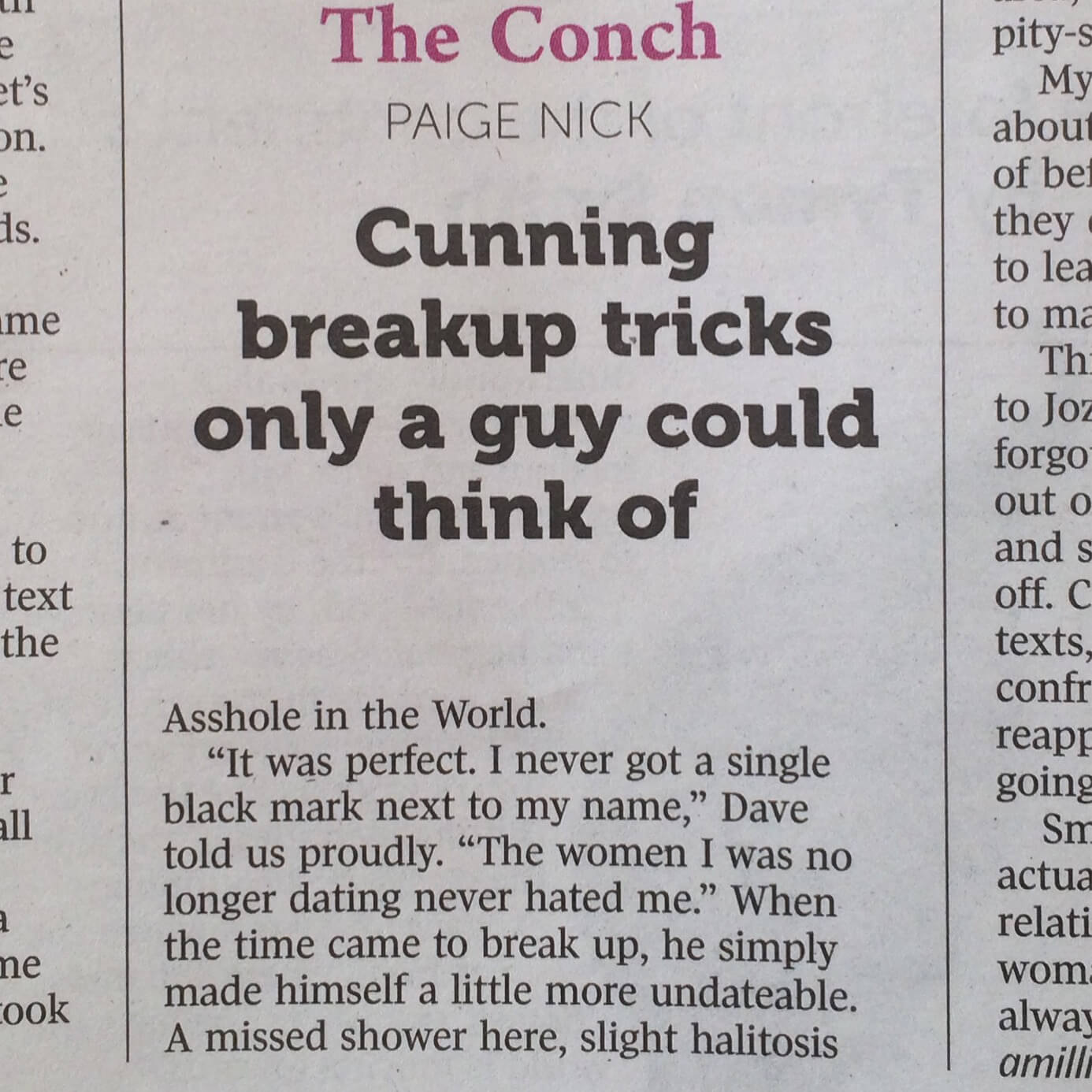 After 20 years of serial dating, which is a different thing to cereal dating (when you date someone who appears yummy and good for you at first, but you later discover what they’re actually made of and how bad they really are for your health.) From career-dating my way through my twenties and thirties, I thought I’d been broken up with in every possible manner, until I met The Breakup King. His real name is Saul, but let’s call him Dave here to protect his reputation.

I met Saul, sorry I mean Dave, one night at a drinks with friends. The subject of dating came up, as it always does, and Dave instantly became our resident expert on ‘what guys are really thinking’ by sheer virtue of the fact that he was the only guy at our table.

One of the women was in a tenuous Tinder thing, so she wanted to chat about that. She shared a recent text conversation and wanted to know if the guy was breaking up with her ninja-style. So we turned to ‘Dave’.

And so followed the discovery of a new species of breakup I’d never come across in the wild before, which we took the liberty of naming, The Nicest Asshole In The World.

‘It was perfect. I never got a single black mark next to my name,’ Dave told us, proudly. ‘Which meant the women I was no longer dating never hated me.’ When the time came to break up with a girl, he simply made himself just a little more undateable. A missed shower here, slight halitosis there, a few expertly placed distasteful jokes, a bad shirt worn too often, a less than manly handshake with the woman’s dad, and voila, the women would do his dirty work for him. ‘I’m so sorry Dave, it’s not you, it’s me. I hope we can still be friends?’

It turns what could otherwise be an ugly tearful break up into a slightly grey area, with the opportunity for a few last pity-screws.

My friend, Nomfundo recently told me about another unique South African dating technique I’d never heard of before. She says, ‘In Xhosa culture they don’t break up with you, they want to leave the door open. Plus it’s bad luck to make a woman cry over you.’

This one guy Nomfundo dated moved to Jozi for a job. After a bit she just forgot about him. Until he contacted her out of the blue a solid eight years later and simply picked up where they’d left off. Calling her baby, sending naughty texts, making dates. When she confronted him about his sudden reappearance, he said, ‘but we’re still going out, you never broke up with me.’

Smart move, player. If you never actually close the door all the way on a relationship, then you never make a woman cry over you, and then you can always get lucky.