HAMBUSHED BY ADVENT – By Paige Nick

In December I bought a Christmas tree. Which is only remarkable if you know that I’m Jewish and it was my first one. It came with a lot of learnings, like sap. And decisions, like getting a plastic, reusable one, versus a real one, with sap.

Deciding to buy the tree was easy. I spent Christmas with my guy and he’s not Jewish, plus we were far away from home, so I didn’t want him to miss out on any of his regular traditions just because he’s with me. Ultimately the only thing I was really conflicted about was the star on top. So we went with something less religiously meaningful, in the form of a pair of crazy neon sunglasses from my agency fancy-dress party.

I loved the smell of the tree and the sparkly lights and shiny things. Plus, it gave me a place to put a couple of gifts, and who doesn’t like those? I draw the line at eggnog though, goy vey, I don’t even know what it is, but it’s always sounded gross to me. Like some kind of boozy custard that you can only drink out of see-through glasses.

So after forty two years of doing nothing more than ‘Santa Channukah’ for the nieces and nephews on Christmas Day (if anyone asks, he comes across the lagoon on his jet ski, that’s our story and we’re sticking to it) with one or two gifts for the kids and a warm Castle Lager and a golf ball for my brother-in-law. Suddenly I was Mz Claus, filled with all this virgin Christmas spirit. I even played Michael Buble’s Christmas album on full blast all weekend. I barely recognised myself. It made me wonder if we become different people depending on who we’re dating?

I haven’t been in a lot of particularly long-term relationships, so this is more a hypothesis than anything I can state with great confidence, but I think we shift our personas to match our partners.

If I was dating someone Jewish, it’s highly unlikely I would have bought that gold sparkly reindeer-horn Alice band. In the same way that if my guy was into art I’d probably spend more time visiting galleries. And if he were a better cook, I’d never make my famous Chicken Surprise ever again.

Is that just a perfectly appropriate reaction to becoming part of a couple, or do I have severe people-pleasing tendencies?

My sister’s married to a cricketer (the beer-loving one) and over the years she’s become a significant member of the cricketing community. I wonder if she’d be doing that if she’d married a racing-car driver, or a base guitarist?

Sure you have to have some kind of penchant for whatever lifestyle you choose. I doubt I’d suddenly be jumping out of a plane, becoming a vegan or hiking Machu Picchu, just because my guy was doing it. But if it involves sparkly things, gifts and bacon, you can probably count me in. 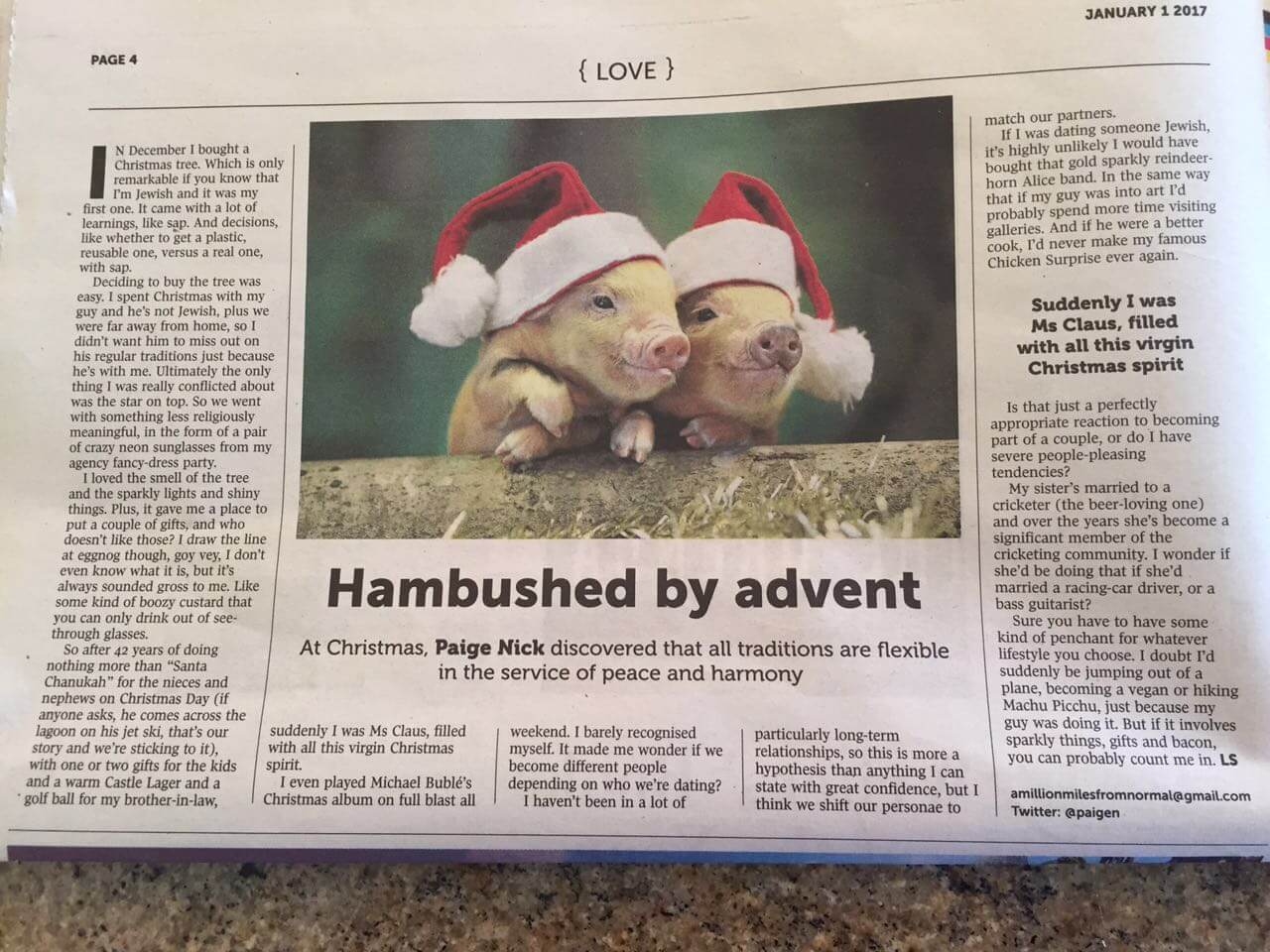